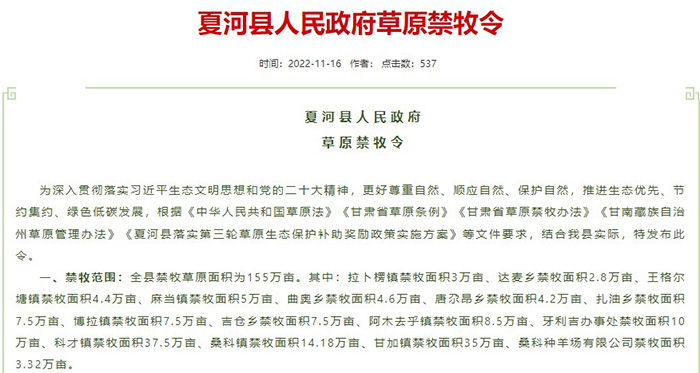 Dharamshala, India — Chinese authorities banned grazing in SangChu County in eastern Tibet for three years, claiming to be "implementing Xi Jinping's thought on ecological civilisation" and making life for the nomads more difficult than ever.

According to the SangqChu (Chinese: Xiahe) County Government's announcement, issued on November 16, 2022, the Chinese authorities prohibit herders in Sangchu County from grazing on hereditary Tibetan pastures, which covering an area of 1.55 million acres, from November 1, 2022 to December 31, 2025.

According to the announcement, as many as 1.55 million acres of grasslands across Sangchu County have been banned from grazing, involving fifteen townships including Labrang Township, Damai Township, and Wangetang Township. The authorities also threatened that those who violate the regulations would be "seriously held accountable according to the law".

"Chinese authorities have a record of implementing harsh policies towards Tibetans. This time, the Chinese authorities are making the life of the nomads more difficult by banning the grazing of animals on the grasslands in the name of environmental protection, but in reality, China wants to turn the life of the Tibetans into a Chinese life. Most Tibetans depend on domestic animals, but China prohibits herders in Sangchu County from grazing animals on hereditary Tibetan pastures, which is a violation of basic human rights and destroys the lives of nomads," said a Tibetan who living in India.