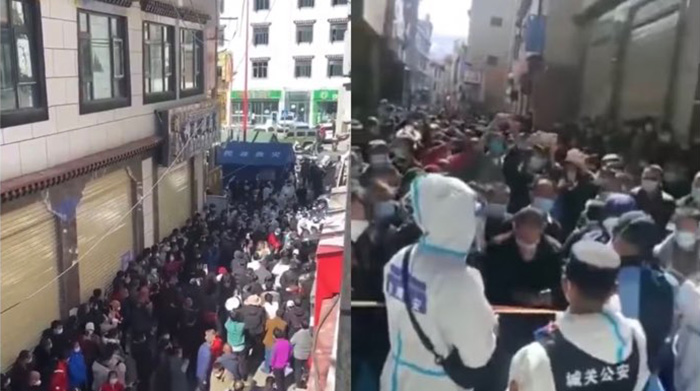 Lhasa, Tibet — A large number of Tibetans in Lhasa, the capital of Tibet, protested against Xi Jinping's zero-covid policy, which has turned the normal life of Tibetans into a prison.

According to some sources, a large number of Tibetans in Lhasa staged a protest against the Chinese authorities in the region and the " zero-covid policy ” of Beijing, which has caused the misery of Tibetans : Chinese authorities in Lhasa forcibly took away Tibetans who tested negative for covid-19, and placed them with a large number of other Tibetans in a large room, called an isolation center, giving them rotten food, leftover food and fast food for covid-19 patients.

A rare protest broke out in Lhasa city districts, after more than two months of lockdown, people are suffering from lack of money because they can't work, increasing food prices, separation of families, car and house loans, and lack of freedom of movement, they are all locked up in houses and isolation centers, Lhasa has become a prison.

Some videos on the Internet show that a large number of Tibetans and Chinese migrant workers protest against the lockdown and the ban on leaving Lhasa, they raise their voices helplessly in the streets of Lhasa on October 26, 2022. Chinese authorities in white protective suits talk with them and let them go, ending the protest.

A video shows a fight in the crowd, although it is not clear whether it is between the protesters or between security and the protesters. But there is no more information about the protest, including the demands and the current state of the protesters.