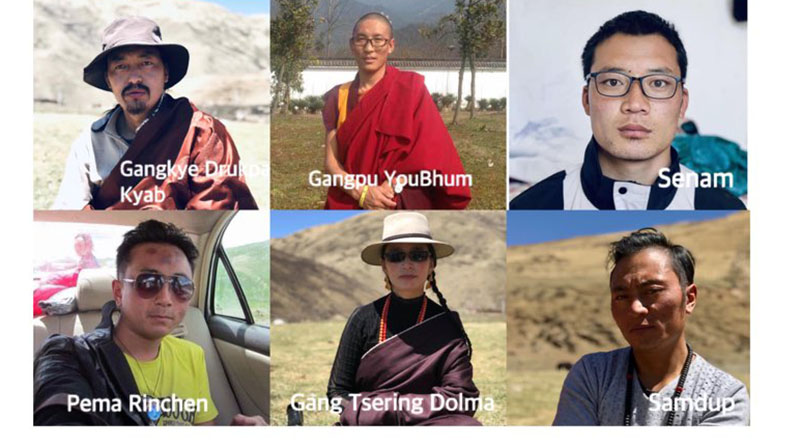 The six Tibetans sentenced to between four and 14 years in prison by the Chinese authorities. Photo: TPI

Dharamshala, India — Chinese authorities recently sentenced six Tibetans, including writers, environmentalist, activists and former political prisoners, to between four and 14 years in prison for allegedly "inciting separatism and “endangering state security”, after they had been held in detention by Chinese police for over a year.

According to a reliable source, five Tibetans from Serta County in eastern Tibet and one Tibetan from Draggo County in eastern Tibet were sentenced to between four and 14 years' imprisonment for allegedly "inciting separatism and “endangering state security”, by the Kardze People's Court on unknown dates. Information about them, including where they were imprisoned and their health status, is difficult to obtain due to the Chinese authorities' strict control of the Internet and constant surveillance of Tibetans.

"Tibetan writer Gangkye Drukpa Kyab, pen name: Gang-metak, was arrested by Serta County police at around 5:30 pm local time on March 23, 2021, at his home in Serta County, eastern Tibet. After being detained by Chinese police for one year and six months, Karze (Garze) Intermediate People's Court sentenced him to 14 years in prison for allegedly "inciting separatism" and "endangering state security" in September 2022," the former Tibetan political prisoner Golog Jigme, who now resides in Switzerland, told TPI,

Drukpa Kyab was arrested by Serta county police on February 15, 2012. After more than one year in detention, Nyachu People’s Court sentenced the Tibetan writer to five and a half years in jail for his writings, which were accused of "inciting secession" and "sending illicit material outside of China." He was later imprisoned in the People's Republic of China's Sichuan Province Prison.

Gangkye Drukpa Kyab was born on August 6, 1981, in Serthar county, Karze, eastern Tibet, from Rag-Tam-Ge-Phen village. His father's name is Thupten Nyima, and his mother's name is Wangthang Dolma. With his wife Wangshu Lhamo, he has a 17-year-old daughter and a 15-year-old son.

"Senam, a Tibetan writer and environmentalist, disappeared after being arrested by Chinese authorities at his home in To-Tsa village, Serta county, eastern Tibet, on the night of 23 March 2021. After more than a year in detention, he was sentenced to six years in prison by the Karze (Garze) Intermediate People's Court," said Golog Jigme.

Senam is a Tibetan writer and teacher who has devoted his life to Tibetan education and environmental conservation. He was arrested by Chinese police in Serta county on September 15, 2020, for establishing a Tibetan Parent's health. Senam is from To-Tsa Village, Rag-Tam, Serta County, Tibet. His father's name is Dhukar, and his mother's name is Lhe Tso. He is the father of one daughter.

"Gangpu You-Bhum, a former Tibetan political prisoner, was arrested by the Chinese authorities on March 22, 2021. After more than a year in detention, he was sentenced to seven years in prison by the Karze (Garze) Intermediate People's Court on an unknown date," the former political prisoner told TPI.

“During the 2008 Tibetan uprising, he raised the Tibetan national flag and called for His Holiness the Dalai Lama's return to Tibet, as well as protesting Chinese oppressive policies in Tibet. Soon after, Chinese authorities arrested him and sentenced him to three years in jail,” he further added.

“On February 19, 2011, he was released. However, he and his friends formed a 'Red Resistance Group' and began a series of events in various locations. As a result of this organisation, the Chinese authorities arrested him again on May 14, 2012, and sentenced him to two years in prison,” Golog Jigme said.

"Chinese authorities detained the former Tibetan political prisoner, Gang Tsering Dolma on April 1(2), 2021. After more than a year in detention, she was sentenced to eight years in prison by the  Karze (Garze) Intermediate People's Court on an unknown date," the former political prisoner told TPI.

“She was arrested multiple times after staging a peaceful protest in Seta County against Chinese policies in Tibet, from 2008 and 2012. On June 1, 2008, a large number of Chinese police with 13 vehicles arrived in Kangtsa village and detained Dolma and her father without giving a clear reason,” Ven Jigme said.

As a result of the horrific torture and beatings she endured in prison, she developed severe health issues after her release, including cardiac problems, vision loss, and an epileptic fit.

“Samdup, another political prisoner arrested by the Chinese authorities for the third time on April 5, 2021, after being held for more than a year, was sentenced to eight years' imprisonment by the Karze (Garze) Intermediate People's Court on an unknown date,” the source said.

Samdup was born in 1992, in the village of Gochog, Serta County, Eastern Tibet. His father's name is Sogyal and his mother is Kyide. Chinese authorities first arrested Samdup in June 2012 and after more than a year in detention, he was sentenced to five years in prison by the Nyachu County Court on August 1, 2013, for allegedly being a member of the "Resist the Red Communist Party" group and conducting Tibet-related activities.

Samdup was released on August 19, 2016 before serving his sentence, but was re-arrested on September 18, 2016 by Chinese police in Serta for the second time, detained for 17 days and tortured during interrogation.

"Tibetan writer called Pema Rinchen disappeared in late 2020. After about two years, he was sentenced to four years in prison by the  Karze (Garze) Intermediate People's Court on unknown charges in September 2022. It remains unclear where he is imprisoned and which court sentenced him, due to strict information control," Ven Jigme said.

Writer Pema Rinchen, from Draggo County, Eastern Tibet, he published a book called "Look" in 2011, and he tells how greedy China occupied Tibet with blood and the current situation of Tibet is very critical and the future life is uncertain and fearful, he called democratic nations to solve the issue of Tibet and also promised to fight against China with his life. After the publication of his book, he was arrested and tortured severely and his health becomes sick since then.

In 2020, he told his friends that he was writing his second book, but after which he disappeared, and recently he was sentenced to four years in prison by the Chinese authorities. he has a sick mother and sister at home.