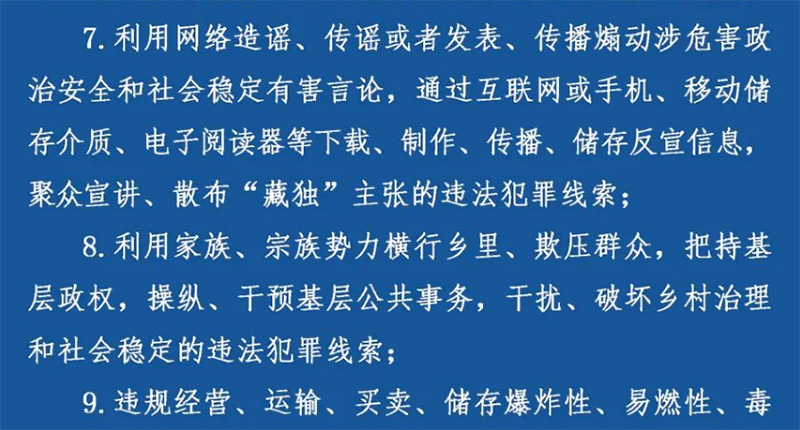 The Lhasa Public Security Bureau issued a public notice and announced rewards ranging from 3,000 (USD 443) to 300,000 (USD 44,395) yuan for those reporting so-called illegal activities, including storing and listening to the teachings of His Holiness the Dalai Lama, celebrating His Holiness' birthday, sharing information with outside Tibet, obtaining financial support from abroad, directly and indirectly supporting people working for the Tibetan cause and spreading the idea of Tibetan independence. Religious activities that have not obtained permission from the Chinese authorities.

The Chinese authorities issued the public notice on July 4, 2022, just days before His Holiness the Dalai Lama's 87th birthday on July 6, 2022, to conduct a thorough check and crack down on Tibetans celebrating His Holiness's birthday in secret at home or elsewhere.

Chinese authorities have tightened restrictions on Tibetans in Karze regions of Kham and throughout Tibet, including banning the displaying of pictures of His Holiness the Dalai Lama in homes, making Sangso (offerings of incense smoke) and praying in homes. The Chinese authorities placed an observer in every 20 houses to check whether people were making Sangso and praying in their homes and ringing bells in houses, if these things happen, they will be arrested, the authorities warned.

The public notice lists 12 points that the authorities consider as “illegal and criminal activities”, whereas many of these activities are legal and fundamental human rights that can be enjoyed in free countries, including freedom of religion, freedom of speech, freedom of expression, freedom of movement and freedom of assembly.

One of these points is intended to prevent Tibetans from having contact with individuals and institutions abroad in any form and from sharing information. It states that "collusion with overseas institutions, organizations and individuals, stealing, spying on, selling, and illegally providing state secrets or intelligence.”

Another point aims to prevent free religious activities in monasteries and states "by using the name of religion to endanger national security, by allying with foreign forces to interfere in national religious affairs, by distorting religious teachings or by using other methods to incite and advocate violence and other extremist ideas and ethnic discrimination.

One of the points also aims to prevent Tibetans, directly and indirectly supporting people working for the Tibetan cause, and it states” funding or assisting hostile forces or other organisations or individuals to endanger national security.”

The Chinese government has labelled His Holiness the Dalai Lama and the Central Tibetan Administration, Tibetan NGOs and some Tibetans as separatists, and has sought to prevent any connection between Tibetans inside and Tibetans in exile and banned teachings and books of His Holiness in Tibet. One of the points stated that, “Producing, selling, distributing, listening to, playing, storing publications, audio and video material of terrorists or extremists, possessing or wearing flags, costumes, objects and memorabilia of terrorists or extremists, as well as financing terrorist, separatist and sabotage activities.”

One of the points is intended to prevent Tibetans directly and indirectly supporting people working for the Tibetan cause, and spreading the idea of Tibetan independence through the internet and social media, and it states, “the use of the Internet to create or spread rumours or to publish or disseminate harmful statements that incite harm to political security and social stability, to download, produce, disseminate or store anti-propaganda information via the Internet or mobile phones, mobile storage media, electronic readers, etc., and gathering the crowd to preach and spread the idea of Tibet independence.”