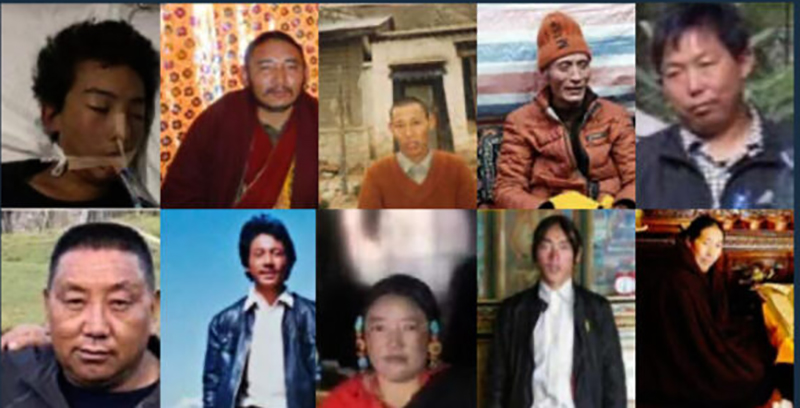 Tibetans who were tortured to death by the Chinese authorities since 2008. Photo: CTA

Dharamshala, India — “There are at least 50 known cases of torture-related deaths of Tibetans inside Tibet since the 2008 nationwide uprising against the Chinese rule,” stated the UN, EU and the Human Rights Desk, Tibet Advocacy Section, DIIR of Central Tibetan Administration (CTA) on the occasion of the International Day in Support of Victims of Torture on June 26, 2022.

The United Nations has declared June 26 as the International Day in Support of Victims of Torture, in commemoration of the adoption in 1987 of the UN Convention against Torture and Other Cruel, Inhuman or Degrading Treatment or Punishment, and in view of the total eradication of torture and the effective implementation of the Convention.

All members of the international community are bound by international laws prohibiting torture in all its forms, whether or not they have ratified the specific treaty prohibiting torture. Having ratified the Convention in 1988, China is obliged to understand that its treatment of Tibetans and prisoners constitutes torture and a violation of a number of international laws that protect the human rights of individuals. Yet torture persists throughout the world, including in Tibet where it is endemic.

“In recognition of International Day in Support of Victims of Torture, it is absolutely essential that the Chinese government abide by its international obligations and stop torturing prisoners, detainees, or any persons and instead treat them with the respect due to their inherent dignity and value as human beings as required by international and national laws. Additionally, it must carry out impartial investigations into all reports of torture and other ill-treatment so that anyone found responsible is brought to justice in fair trials and that reparations and redress are provided for victims and their families,” stated the Human Rights Desk of CTA.

“In Tibet, the Chinese government continues to torture and ill-treat Tibetans accusing them of having endangered “national security” or “incited separatism” within the community. The prevalence of inhumane torture in prisons, detention centres and police stations in Tibet has resulted in not only the deaths of Tibetans, but also the encouragement of a practice that will likely be passed on through successive generations till Tibet completely succumbs to Chinese rule,” it explained.

“Chinese officials have an atrocious track record of using severe torture on prisoners while in detention and denying them medical care, causing health problems and exacerbating existing health conditions. As a result, many Tibetan political prisoners have been released from prison in poor health or on medical parole, with some becoming permanently crippled for life and others struggling to survive before ultimately succumbing to their injuries,” they said.

“There are at least 50 known cases of torture-related deaths of Tibetans inside Tibet since the 2008 nationwide uprising against the Chinese rule. Nevertheless, given the Chinese government’s high restrictions on information flowing from inside Tibet, the actual figure would probably be much higher,” the the Human Rights Desk stated.

“Until now, there has been no evidence of torture of Tibetan prisoners investigated in Tibet or that the Chinese authorities and police have been held accountable, as required under domestic and international laws. Compensation for injuries suffered during detention is extremely rare, due to the government’s unwillingness to investigate or outright deny cases of torture in Tibet, despite China’s domestic laws and the Convention against torture providing financial security to the victims of torture,” CTA mentioned.

“Additionally, the Chinese government conveniently refuses to allow UN mandate holders and Special Rapporteurs access to all three traditional provinces of Tibet to investigate the situation there on the ground. Eight UN mandate holders have visited China so far, but ironically most of them are associated with social and economic issues rather than civil and political rights. Those who were permitted access to Tibet were closely monitored, and tours were controlled at all times. As the result of China’s effective denial of access to areas under its control, it has been able to enact its extensive and systematic human rights abuses in Tibet with near-total impunity, including the use of torture and ill-treatment against Tibetans on a routine basis,” they added.