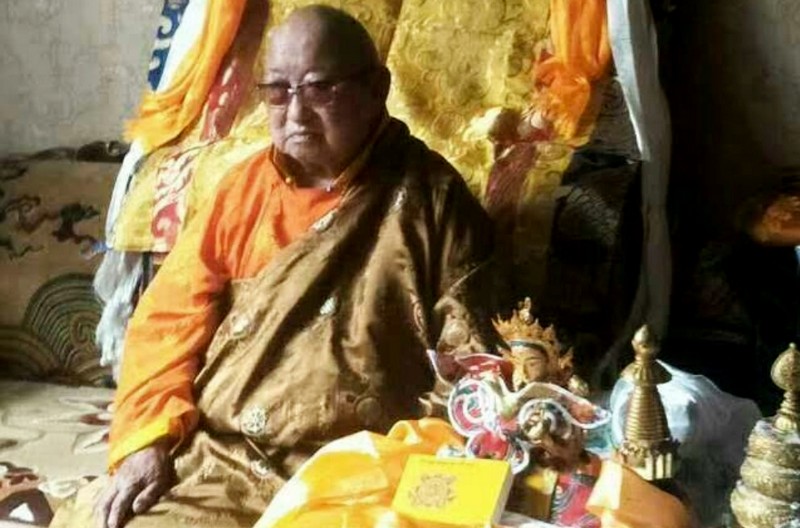 Dawa Rinpoche, a senior religious figure from Shag Rongpo Monastery in Nagchu, Tibet, who was being politically persecuted, died earlier this year, yet the Chinese authorities blocked information and imposed various restrictions on his funeral, which Tibetans were also forbidden from attending.

Emerging sources from inside Tibet, Dawa Rinpoche, the beloved Tibetan high ranking Lama, died in Lhasa, the capital city of Tibet on January 30 this year at the age of 86.

During the two weeks of his death, his dharma body entered a state of deep meditation or dharma fixation known in Tibetan Buddhism as "Thukdham" in which the body not only remains seated in meditation but also has no odour, deformation, or decay, a source said on condition of anonymity.

In Tibet, when a high-ranking religlous figure passes away, the devotees generally go to pray, make offerings, worship, mourn, and hold a grand funeral in accordance with traditional customs, but Dawa Rinpoche, because he was a well-known former political prisoner, had been monitored by the Chinese authorities before he passed away. The authorities feared that the growing number of people showing up at the funeral would inevitably lead to demonstrations, and adopted heavy-handed restrictions: First blocked news of his passing, then took warning measures against Tibetans and also removed all news related to him, including photos and videos, from the Internet, another source confirmed.

On February 13, after Dawa Rinpoche came out of his "Thukdham", authorities banned outside devotees from coming to see his body, the source stated.

On February 15, the authorities issued a "four-no" order to Tibetans that all devotees " were not allowed to pay homage, offer khatas (white scarves), create commotion and take photos or videos" while his body was being moved from Lhasa back to Shag Rongpo Monastery in Nagchu. The authorities warned that if anyone violated the orders, they would be arrested and the transport of the body would be cancelled.

On February 18, his body was moved back to his hometown monastery with two vehicles escorted by the monastery and accompanied by military police under strict control. Local Tibetan people flocked and requested to see Rinpoche’s body, but were violently prevented by the authorities, leading to a brief clash. The incident was later mediated by monks from the monastery to stop it from deteriorating further.

On February 25, the authorities allowed only monks from the monastery to attend the funeral ceremony, but no one was allowed to take pictures or videos, and monks had to be scanned when they entered.

Dawa Rinpoche was born in 1937 in Nagchu, Tibet, and was later recognised as a reincarnated Lama, known as the Fifth Choktrul Dawa Rinpoche. After the illegal occupation of Tibet by the Chinese Communist Party, He was persecuted politically for expressing his grievances against the oppressive policies of the Chinese Government, including a five-year imprisonment during the so-called Democratic Reforms and a seven-year imprisonment during the Cultural Revolution.

In 2010, he was arrested by the Chinese government for discussing with His Holiness the 14th Dalai Lama about the search for the reincarnation of Rongpo Chogyal Rinpoche, the head of Shag Rongpo Monastery, and was later sentenced to seven years in prison. Since his release, he has been under constant surveillance by the authorities.

Shag Rongpo Monastery has been the scene of several protests against the Chinese government, mainly due to interference in the monastery's Buddhist activities, especially the authorities' designation of the reincarnation of the head of the monastery without going through the formal religious procedures, which has caused strong opposition from the monks. Since then, the authorities have taken suppressive measures, forcibly closing Shag Rongpo Monastery in July 2013, expelling monks, and placing military and police officers on tight security at the monastery. In August of the same year, thousands of Tibetans from 16 local villages staged demonstrations and petitions demanding that authorities reopen the monastery and release Dawa Rinpoche, which led to an even greater crackdown, with many monks and lay Tibetans being arrested and sentenced to prison terms and forced to undergo patriotic education.

The source further indicated that in January 2021, the Chinese government began to upgrade, add and reinforce the surveillance system in the entire Nagchu area, using solar panels to power the surveillance equipment, so that all corners of the area, from the county town to the remote villages, are monitored and no blind spots are left, and the quality of the surveillance footage is upgraded to " high definition ". In addition, the authorities have long been implementing measures to block the Internet from time to time in the counties of Driru and Nagchu, and cell phones are either bugged or disconnected, while local Tibetans are almost cut off from their relatives and friends outside Tibet.