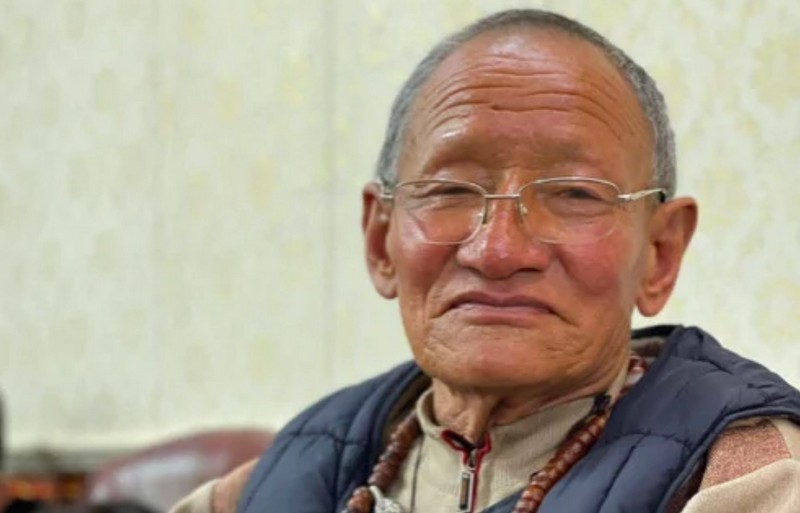 Tahpun, who set himself on fire to protest against the Chinese government's oppressive policies in Tibet on March 27, 2022.

Dharamshala, India —A senior man in Tibet carried out a self-immolation in March 2022 in front of a Chinese police station located near the Kirti monastery in protest against the repressive policies of the Chinese government and the inhumane treatment of people in Tibet.

Emerging sources say that Taphun, an 81-year-old Tibetan man, from Meruma nomadic village in Ngaba County of northeast Tibet, self-immolated in front of a Chinese police station near Kirti Monastery  on 27 March 2022, protesting against ongoing oppressive policies of the Chinese government and the inhumane treatment of the people of Tibet.

"Taphun self-immolated at around 5 am local time on March 27, 2022, in front of a Chinese police station near Kirti Monastery, which was monitoring the monastery's activities, to protest against the Chinese government's repressive rules in Tibet," said Kanyag Tsering and Lobsang Yeshe, spokesperson of Kirti Monastery in Dharamshala, citing local sources in Tibet.

“ After Taphun self-immolated in front of a Chinese police station near Kirti Monastery, Chinese authorities forcibly arrested him and took him away, but he later died in custody,” the sources confirmed.

“In the past years, especially in March, the Chinese government has imposed increased restrictions throughout Tibet, including in Ngaba County, where self-immolations have been frequently reported. Chinese authorities have imposed severe restrictions, investigations, and harassment on Tibetans in Ngaba County,” the sources added.

On his 80th birthday last year, Taphun had said, “It is certain that the sun of happiness will shine over Tibet due to the blessings of His Holiness the Dalai Lama. Young Tibetans should not lose heart!"

Taphun was a resident of the nomadic village of Meruma, Ngaba County (Ch: Aba Prefecture, Sichuan Province), in Eastern Tibet. He has always denounced China government’s repressive policies and mistreatment of Tibetans inside Tibet.

over the past 70 decades, there has been ongoing political repression, social discrimination, economic marginalisation, environmental destruction and cultural assimilation in Tibet, notably through Chinese migration into Tibet, causing great resentment among the inhabitants of occupied Tibet.

The totalitarian communist state of China began its invasion of Tibet in 1949, reaching full occupation of the country in 1959. Since then more than 1.2 million people, 20% of the country's six million population, have died as a result of China's invasion and occupation. Additionally, more than 99% of of Tibet's six thousand religious monasteries, temples and shrines have been looted or destroyed, resulting in the destruction of hundreds of thousands of sacred Buddhist scriptures and treasures.

Tibet was an independent state in the Himalayas until 1949, with little contact with the rest of the world. Tibet existed as a rich cultural treasure trove of unifying themes among Tibetans, as did their own language, literature, art and worldview, shaped by life at high altitudes, in a climate of harshness and in balance with the surrounding landscape.