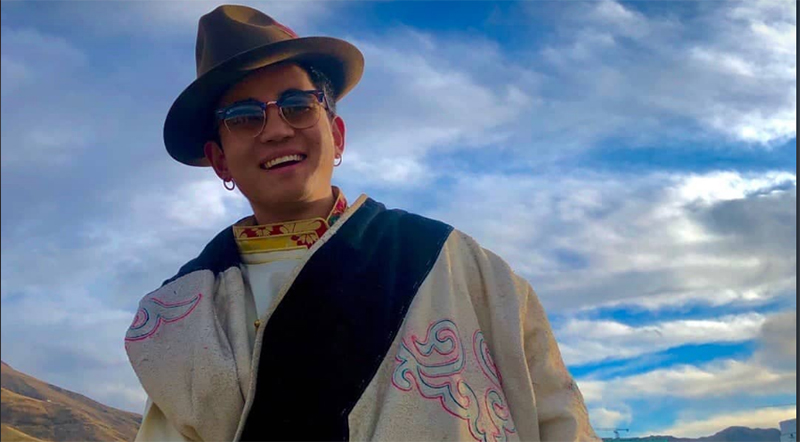 Dharamshala, India — Tibetan well-known young singer Tsewang Norbu has self-immolated in front of the Potala Palace, the resident of His Holiness the Dalai Lama in Tibet, to protest against China’s oppressive policies and inhuman treatment of Tibetans, and sadly passed away.

According to sources, the famous 25-year-old singer Tsewang Norbu set himself on fire in front of the Potala Palace in Lhasa, the capital of Tibet, on February 25, 2022, to protest against the Chinese government's repressive policies in Tibet. He passed away in a Hospital in Lhasa, after Chinese authorities arrested him.

“Tsewang Norbu's uncle is a well-known Tibetan political prisoner, Lodoe Gyatso, who has been imprisoned in China three times for protesting China's oppressive policies in Tibet and is still in prison. Therefore, Tsewang Norbu must have a good knowledge of the Tibet issue from his uncle," said a Tibetan currently living in Canada, citing his information to Tsewang Norbu's relatives living in abroad.

Singer Tsewang Norbu's uncle is a well-known Tibetan political prisoner named Lodoe Gyatso, alias Sogkhar Lodoe. Chinese authorities sentenced Lodoe Gyatso, the former Tibetan political prisoner, to 18 years in prison while his wife was sentenced to two years in prison, in 2018. After Lodoe Gyatso, staged a peaceful solo protest in front of the Potala Palace in Lhasa, the capital of Tibet, shouting slogans against China's oppressive authoritarian rule in Tibet, on January 28, 2018.

Tsewang was born on October 9, 1996, in Nagqu, Centre-easternTibet. His father called Choekun, a musician, and his mother, called Sonam Wangmo, was a popular Tibetan singer. He studied and grew up in Nagqu. As a child, he watched his father, Choekun, make music, and he began to fall in love with music and sing modern, ethnic, pop, and traditional songs, as well as composing songs. He was a pop singer from Tibet and graduated from Tibet University in Lhasa, Tibet.

In 2014, Tsewang Norbu participated in the Guangdong TV talent show "China's Good Boys" and was ranked among the top 12 in the Western Region and the top 48 in the country. In 2017, he participated in the Tencent Video music idol raising show "The Son of Tomorrow" and won 9th place in the national finals. In 2019, he participated as a musician in China's first band growth music reality show "Let's Band Together" produced by Youku, and joined Li Ronghao's team. In 2020, his song "Forever Love" was released. In 2021, he participated in Sichuan TV's Tibetan culture innovation promotion singing show "Tibetan Style Beautiful Youth".

One person posted on Weibo on March 4, 2022, “Kind and gentle boy, may you pursue the music you love most in another world. After free oneself and no more pain, I hope, Love you.” Then another person asked in a comment what happened and that person wrote: “here no convenience to say.”

“I was so happy about the release of Norbu's new song recently, but then I heard that it was taken down, and then I read someone else's comment and I really want to cry the whole day,” another person wrote on Weibo(Chinese social media app) on March 5, 2022.

Tsewang Norbu is the 156th Tibetan to self-immolate. So far, 156 Tibetans have sacrificed their lives for the cause of Tibet and the return of His Holiness the Dalai Lama to Tibet.

Central Tibetan Administration (CTA) held a prayer service on March 14, 2022, in the Sikyong Auditorium of the CTA to mourn the last immolator, Tsewang Norbu, who passed away in the first week of March 2022, after self-immolated in front of the Patala Palace. The prayer service was attended by top officials and staff of CTA.

Norbu's self-immolation is the latest case since 2019 and the first case in Lhasa since 2012. More than 150 Tibetans have self-immolated inside Tibet since 2009, the majority of them fatally, in an apparent protest against ongoing Chinese rule in Tibet. The demands of the self-immolators, highlighted by their slogans, are for freedom in Tibet and the return of His Holiness the Dalai Lama, to Tibet.