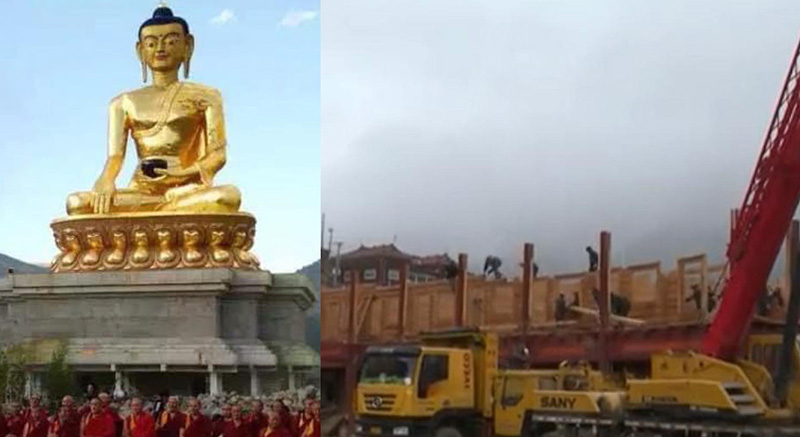 The 99-foot high Buddha statue and the Chinese authorities destroying it. Photo: TPI

Dharamshala, India — At least 13 Tibetans were detained by Chinese authorities for allegedly posting photos of the recently demolished 99-foot tall Buddha statue and the three-story statue of Jetsun Jampa Gonpo (Maitreyanatha) on China's social media platform (Wechat) and for having "politically sensitive content" on their mobile phones.

According to a reliable source, at least ten Tibetan nuns from Draggo County in the Kham region of eastern Tibet were detained, interrogated, and beaten by Chinese authorities in November 2021, after the authorities searched the nuns' mobile phones, which allegedly contained politically sensitive content.

"Lobsang Tsomo, one of ten detained Tibetan nuns, was arrested by Chinese authorities in Dragyub village, Chamdo town, for contacting her relatives outside Tibet. She was interrogated and tortured by the Chinese authorities for three months before being released, but she has not been allowed to leave the village and is being closely monitored by the Chinese police," the source said, citing sources in Tibet.

“Other nuns were detained by the Chinese authorities in the village of Dragyub in Chamdo town. Their names and their conditions are still unknown. The reason for their detention is that they allegedly found politically sensitive information after searching their mobile phones. They were interrogated and placed in a "political re-education centre",” the source, living in India said.

“Chinese authorities in Draggo county detained three Tibetans, Asang, Dorta, and Nortso, from Dragyub County, in the Kham region of eastern Tibet, in early February 2022, for allegedly finding "politically sensitive information" after searching their mobile phones. They were taken to a prison in Chamdo town, in the Kham region of eastern Tibet. The Tibetans were arrested on their way back from Larung Gar Monastery in Serta County, north-eastern Tibet, where they had gone to visit and pray,” said the source.

“They were arrested for allegedly posting photos of the recently demolished 99-foot high Buddha statue and the three-storey statue of Jetsun Jampa Gonpo (Maitreyanatha) on the Chinese social media platform (Wechat),” he added.

According to TPI’s previous report, the Chinese authorities have detained at least 10 Tibetans from Draggo County, Kham region of eastern Tibet, over the recent demolition of the Buddha statue, some of them were tortured and ill-treated while in detention. Those detained by the Chinese authorities are Paga, Khenpo(abbot) of Draggo Monastery, Nyima, treasurer of Draggo Monastery, Tashi Dorjee and Nyima, both are monks of Draggo Monastery, Tsering Samdup, and Trolpa, and Lhamo Yangkyi from a village in Draggo county, due to strict Chinese surveillance and the cessation of information from Tibet, the names of the other detainees could not be identified.

Chinese authorities continue to crack down on Tibetans in Draggo County after a Buddha statue was destroyed in Draggo County, Kham Region, Eastern Tibet. The plight of former Tibetan political prisoners is worsening, with no freedom of movement in Draggo County.