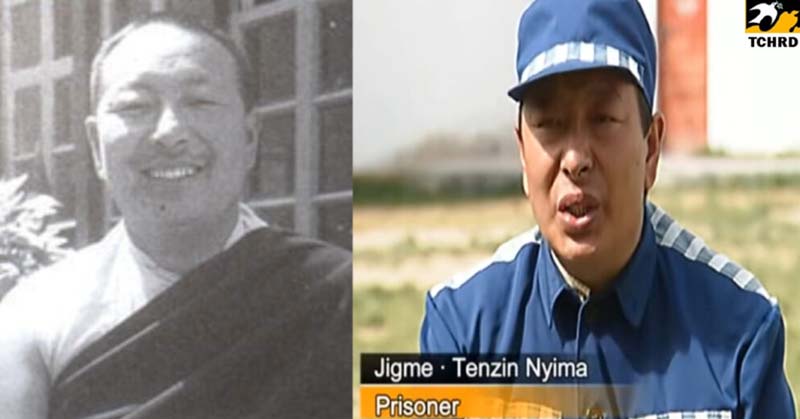 Bangri RInpoche in an undated photo before arrest (L) and in a screengrab of a propaganda video on Drapchi Prison in the early 2000s (R).

Dharamshala, India — Tibetan Center for Human Rights and Democracy(TCHRD) calls on the Chinese Communist Party to provide evidence of the release of Tibetan philanthropist Bangri Tsamtrul Rinpoche, who was due to be released on July 31 of this year after serving 18 years of life imprisonment in Chushur (Ch: Qushui) County Prison near Lhasa, capital of Tibet.

Founder of the Gyatso orphanage home for Lhasa's deprived children, Bangri Tsamtrul Rinpoche was scheduled to be released on July 31, 2021, from Chushur (Ch: Qushui) County Prison near Lhasa after 18 years of life imprisonment.

However, no reports regarding his release have been provided by Chinese authorities. All information about the Rinpoche's health conditions and status has been withheld, raising concerns around his well-being. In 2005, he was moved to Chushur and in the same year, he was found to be suffering from heart disease and gallstones.

“Chinese authorities to issue a public confirmation with verifiable evidence that Bangri Rinpoche has been released with sound physical and psychological health conditions. Chinese authorities must guarantee that Rinpoche is provided with necessary medical care without delay and that his supplementary sentence of “deprivation of political rights” for life is not used as a pretext to impose further restrictions on his human rights,” said TCHRD.

Rinpoche had been detained on 27 August 1999 along with his wife Nyima Choedon for their alleged role in plotting with a building contractor Tashi Tsering’s attempt to blow himself at Lhasa Plaza after the 6th National Minority Games.

On 31 July 2003, Rinpoche’s life sentence was commuted to fixed-term imprisonment of 19 years. In the summer of 2005, he was moved to Chushur, and the same year in November, his sentence was further reduced by one year making him eligible for release in July 2021.

Rinpoche was one of the three detainees the then UN Special Rapporteur on Torture Dr. Manfred Novak interviewed on his visit to the Tibet Autonomous Region from 25 November 2005 to 2 December 2006.

In his report following the visit, the Special Rapporteur had noted that torture remains “widespread” contributing to “a palpable level of fear and self-censorship, which he had not experienced in the course of his previous missions”.

The Special Rapporteur also visited Nyima Choedon who was released in February 2006 after her sentence was reduced twice.

Bangri Tsamtrul Rinpoche (also known as Jigme Tenzin) was born in Nangchen (Ch: Nangqian) County, Kyegudo (Ch: Yushu) Tibetan Autonomous Prefecture, Qinghai Province, in the Tibetan province of Kham. He was recognized as the reincarnation of Bangri Rinpoche of Nangchen Bangri Monastery. Rinpoche was very concerned about children especially orphans who could not receive an education.

His concern and generosity led him to establish a school for orphans through his own expenses and generous donations. The orphanage founded in Gyatso Township near the Norbulingka Palace was named the Gyatso orphanage.

In May 1996, forty orphans from various parts of Tibet were admitted into the orphanage. Rinpoche took the overall responsibility while his wife Choedon assisted him in administration works. The orphans were given education in the Tibetan language, Chinese language, English language, and mathematics. After their arrest in August 1999, the orphanage was declared illegal and closed in October the same year.