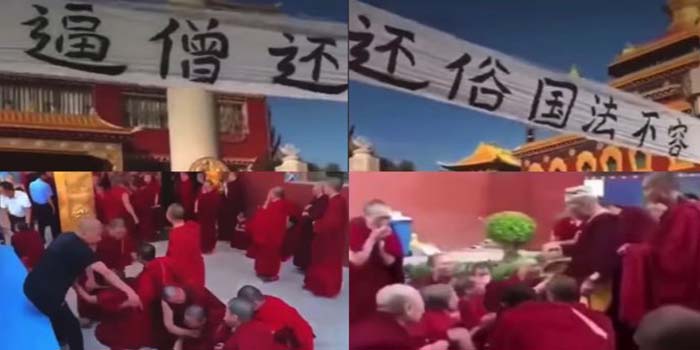 Dharamshala, India — A Tibetan monastery (Red City Monastery) in Linxia, Gansu Province, China, was recently forcibly closed by the local Chinese government, following which the monks were violently expelled and forced to return to their lay lives outside the monastery.

The Red City Temple(Ch: Hongcheng) also known as the Royal Order of Pagoda Temple is a Tibetan Buddhist Sakya School Monastery in Yongjing county of Gansu province in China. The Red City temple has a rich history. It was initially destroyed in 1958 during the Cultural Revolution. The reconstruction was started in 2006 and completed in three years and has more than 3,000 monks . This historical landmark was forced to shut down by the local Chinese authority recently.

A video that was uploaded online on August 1, 2021 depicted the monks who were forced to live a secular life when the monastery was closed down. The disappointed monks sobbed and grieved in front of the temple after being evicted. There was a banner put up to protest these actions taken by the government. It read, “Forcing monks to return to their secular life is illegal and unacceptable!”. One of the monks climbed on the top and tried to stop the Chinese Communist Party (CCP) from shutting down the monastery. The voices of the enraged monks echoed through the atmosphere as they were evicted against their will.

The backstory behind this event dates back to the growth of the pandemic in 2020 according to Tibetan female writer Tsering Woeser. When the pandemic’s growth started making the situation worse, Gentsong Rinpoche, with compassion and patriotism in his heart, mobilized all his disciples to gather donations from different people and places. This project got a good response and a huge sum of 300,000 was collected.

However, its results brought unexpected trouble to the monastery’s future. According to sources, the Local Chinese authorities expressed concern and suspicion about how the monastery had become so wealthy, and used this as an excuse to investigate and overhaul. Ultimately, the matter ended with a demand that the monastery share its income equally with the local government. But the matter did not end there. Random and unreasonable inspections became more and more frequent. Gradually, the problem escalated until the government decided to directly seize the monasteries, expel the monks and force them to live a secular life against their will.

This is not the first time that the terrible events experienced by the Red City Monastery and its monks have occurred. In the past few years, many monasteries in Tibet have been closed down by Chinese authorities. For example, "China ordered the closure of two monasteries in the so-called Tibet Autonomous Region (TAR) on April 14 and 15, 2020, as a measure to prevent the Covid-19 pandemic, despite the fact that the region has not had any cases of the novel coronavirus since February 12, 2020," said a report published by the Tibet Review on April 18, 2020.

It indicates how the Chinese authorities have used the pandemic as an excuse to further their own agenda and attempted to threaten the survival of Tibetan culture and religion multiple times.