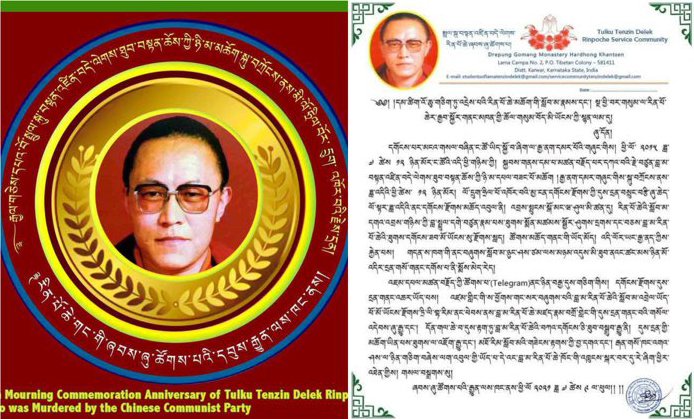 Dharamshala, India — Tibetans, and disciples of Tenzin Delek Rinpoche recall his teachings and valuable contributions to Tibet's religion, culture, and language on the sixth anniversary of his demise.

July 12, 2021, marked the sixth anniversary of Venerable Tenzin Delek Rinpoche's mysterious demise in a Chinese prison. Rinpoche died on July 12, 2015, while serving a life sentence at Chuandong Prison in Chengdu, Sichuan Province, southwestern China. The Chinese prison authorities informed Rinpoche's sisters of his death on the same day. However, despite repeated attempts, they declined to go into detail about the circumstances leading up to his death.

In 2002, in what was claimed to be a politically motivated charge, Rinpoche was arrested by Chinese authorities for his alleged involvement in a bomb blast that occurred in Chengdu city. The real reason for his arrest by Chinese authorities, however, is believed to be his growing popularity among the public and his staunch loyalty to His Holiness the Dalai Lama. He was sentenced to death with a two-year reprieve on December 2, 2002. This charge was laid irrespective of the fact that Rinpoche had proved his innocence against all the Chinese allegations.

Tibetans, his students, monks, and supporters pay tribute to Tenzin Delek Rinpoche on this day by giving outstanding people the Tenzin Delek Rinpoche Medal of Courage, granting scholarships to Tibetan students, and providing food for the elderly. However, due to this pandemic, this year's event was postponed until Rinpoche's next birthday.

“I was 12-years-old the last time I saw my uncle, Tenzin Delek Rinpoche, alive and well. The next time I saw him, in July 2015, his soul had already left this earth and his body was mutilated and marred. An esteemed spiritual leader and hero to many, Rinpoche’s only purpose in life was to serve his people and country - Tibet. He truly embodied the Buddhist principle of compassion for nature and humanity: he stopped Chinese ‘development’ projects which would have destroyed Tibet’s environment and even brokered peace between Tibetan and Chinese people living in his community by acting as a mediator when there were squabbles and disagreements. So when I learned of Rinpoche’s death, the profound sadness I experienced was not only because I had just lost a beloved uncle, but also because I felt Tibet had just lost one of our greatest advocates and leaders," said Rinpoche's niece, Nyima Lhamo while remembering about her late Uncle.