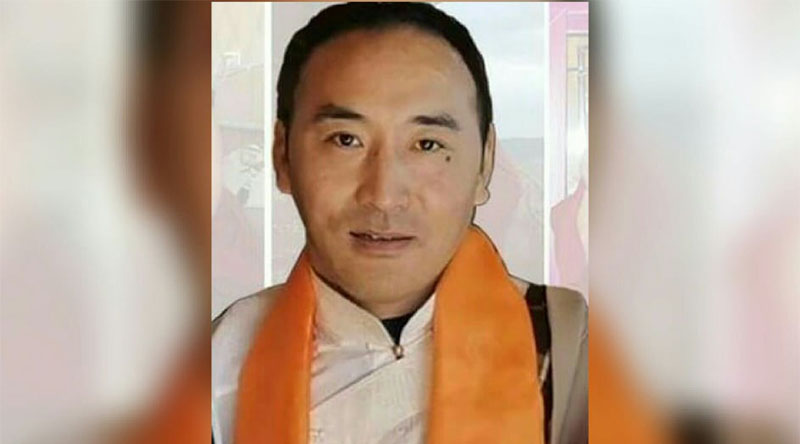 Akyakya, around 40 years, of Meruma in Ngaba County. Photo: TPI

Dharamshala, India — A Tibetan man called Akyakya was released on 10 December, 2020 after more than five and a half years in Chinese prison. Imprisoned for peacefully celebrating the 80th birthday of His Holiness the 14th Dalai Lama of Tibet in Ngaba County of north-eastern Tibet.

“Akyakya was released on 10 December, 2020 and arrived home”, stated Kanyak Tsering, spokesperson at the exile seat of Kriti Monastery in Dharamshala. Akyakya was arrested in 2015 for organising and celebrating the birthday of the Tibetan spiritual leader, His Holiness the 14th Dalai Lama. He was sentenced to 5 years in jail by the Chinese authorities along with nine other Tibetans on various charges.

Akyakya, around 40 years, hails from village no.1 of Meruma in Ngaba County (ch: Aba, Tibetan and Qiang Autonomous Prefecture) in north-eastern Tibet. He used to be a monk at Kriti monastery in Ngaba County. His mother’s name is Dungmo.

He was previously arrested in 2011 for being part of a public demonstration against Chinese repressive rules at the time of Lobsang Phuntsok’s self-immolation, another Tibetan martyr. He was sentenced to three years in the Chinese prison for the same charges.

He was arrested by the Chinese authorities along with 9 other Tibetans following the birthday celebration of the 14th Dalai Lama in 2015. The Intermediate Peoples' Court in Barkham, Ngaba County sentenced him to a prison-term of 5 years while his other Tibetan companions levied between 5 to 14 years of prison terms on various charges against them as informed by Kanyak Tsering to TPI.

Although he is freed from the clutches of Chinese custody, he is constantly under the communist regime’s surveillance and further information is quite difficult to acquire. His time in the cruel Chinese jail and the procedures of ruthless torment he faced at the hands of Chinese police. The condition of his well-being after the release is not very well known due to the Communist’s imposition of restriction in the area.

In Tibet today, Tibetans are being arbitrarily arrested, imprisoned and tortured for merely expressing their suffering under China’s rule and ordinary exercise of the freedom of expression and opinion guaranteed by the Chinese Constitutions and other International Conventions to which China is a state party.