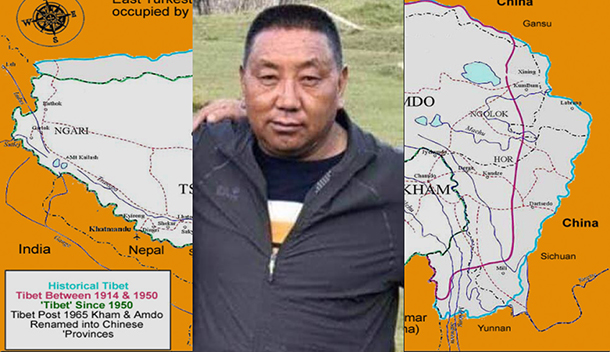 Dharamshala — A former political prisoner of Tibet has passed away due to injuries sustained from severe beatings and torture in a Chinese prison. Tibetans living in the peace-loving countries portrayed him as one of those freedom fighters who have sacrificed their lives in the freedom struggle in a show of solidarity.

Tsering Bhakdro, a 51-year old Tibetan passed away at his home in Lhasa, the capital of Tibet, on April 26, 2020, after a prolonged illness due to physical torture he endured during his long term sentence in the Chinese prison. He suffered years of poor health following his release in the year 2000.

'The Chinese-authoritarian state police and prison officials brutally and severely tortured him in prison physically and mentally. They were repeatedly subjected to interrogation sessions with beatings and threats by the Chinese authoritarians,' said a source with contacts in Tibet.

Bhakdro was originally from Gyama village in Maldro Gongkar (Ch: Mozhugongka) county in Tibet Autonomous Region. He was enrolled in Gaden Monastery known as one of the "great three" Gelug university monasteries of Tibet in Lhasa where studied Buddhist scriptures when he was young.

Their peaceful protest was held when Chinese authorities launched a political re-education campaign, attacking Tibetan culture and identity which is inseparably linked to Tibetan Buddhism and denouncing their loyalty to their exiled spiritual leader, His Holiness the Dalai Lama.

Tibetan protesters were beaten severely by Chinese invaders and held in Gutsa detention center in Lhasa, on June 10, 1992, after he and some of his colleagues protested against the Chinese illegal rule in Tibet. Bhakdro was finally released on June 9, 2000, after completing his prison term.

The protesters took to the street carrying the historical Tibetan national flag and proudly raising slogans calling for the independence of Tibet and the return of His Holiness the Dalai Lama. Immediately the Chinese authoritarian "Public Security Bureau" arbitrarily arrested all the protesters at the scene.

In November 1992, Bhakdro was sentenced to eight years in prison by the so-called Lhasa People’s Intermediate Court and transferred to Lhasa’s infamous Drapchi Prison, where he was repeatedly tortured and he would remain until his release on May 9, 2000.