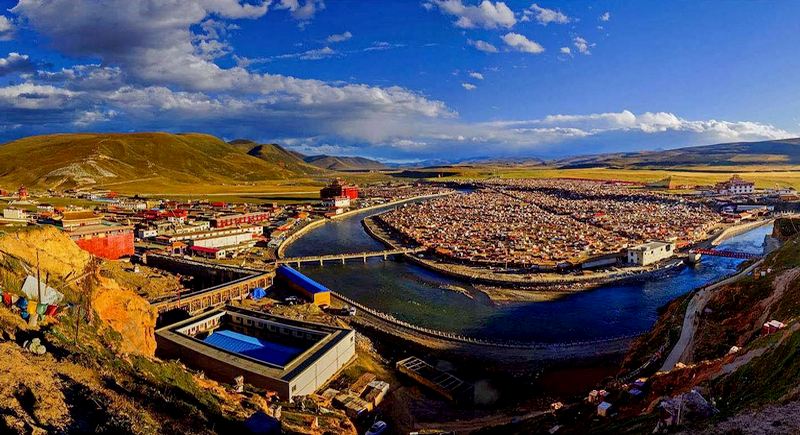 Dharamshala, India — While paying deep reverence and gratitude to His Holiness the 14th Dalai Lama, to mark the 59th anniversary of the Tibetan Democracy, Ven Karma Gelek Yuthok, acting President of the Tibetan government in-Exile also criticized the Chinese government on Monday for its ongoing religious persecutions and repression of cultural freedom in Tibet.

"The rampant cultural and religious persecution in Tibet including the demolition of Buddhist academies and forcible removal of monks and nuns which continues to this day forced the world to call-out China on its discriminatory practices against Tibetans" inside Tibet, Ven Karma Gelek Yuthok, who is Minister of Department of Religion and Culture of the Central Tibetan Administration said while addressing the gathering.

The Minister said that "Just a couple of months back, more than 7,000 monks and nuns were forcibly evicted from Yachen Gar Buddhist Academy situated in Tibet’s Karze region and nearly half of the Yachen Gar Buddhist Complex has been demolished. So-Called atheist China’s interference in Tibetans’ Buddhist traditions, including recognizing reincarnated Tulkus has outraged the conscience of Tibetans and the international community."

Tsewang Gyalpo Arya, the Information Secretary of the Department of Information and International Relations (DIIR) of the CTA, also expressed concern about the deplorable situation inside Tibet, particularly the current deteriorating situation of the Buddhist center.

Secretary Gyalpo remarked, “The situation in Tibet has gone from bad to worst. Tibet is now virtually closed to the outside world. Through its large military presence and the draconian rule, China has Tibet under its iron grip in full control physically."

"Now, they are trying to erase the Tibetan identity and spiritualism by putting restrictions on the Tibetan language and religion. Destruction of monasteries and removal of monks and nuns from Larung Gar and Yachen Gar is a blatant violation of religious and cultural rights of the people," he said.

"Almost half of the monastic complex of Yachen Gar is destroyed, this is a great loss not only to the Tibetans but also to the Chinese practitioners and to the world heritage. We sincerely urge the Chinese leadership to respect our religious and cultural values,” he added.

"Inside Yarchen Gar, the levels of surveillance by the Chinese authorities have been greatly increased. Around 600 military personnel have been deployed at the site to monitor the inhabitants," London-based Free Tibet said.

"A series of evictions has taken place at the religious community of Yarchen Gar in Kardze, eastern Tibet, with large numbers of monks and nuns forced to leave their homes," the group said, adding: "Among those forcibly removed were 70 nuns who are originally from the regions of Jomda County in the TAR."

"Following their removal, the nuns were taken to detention centres, where they have been subjected to patriotic education. As part of their patriotic education, the nuns have been disrobed from their religious dress, ordered to praise the People’s Republic of China and told to denounce the Dalai Lama," it added, saying "they have also been made to undergo examinations."

Free Tibet said "the nuns will be kept in detention for two to three months. Once they are released, their freedom of movement will be restricted and they will be prohibited from joining any new monasteries. Many of these nuns will have made a vow to not return to a layperson’s life. They have been given little in the way of compensation and no appropriate arrangements have been put in place to allow them to practice their religion and continue their studies."

When shedding light on the Chinese authorities' brutal crackdown, the UN, EU, and Human Rights Desk of the DIIR stated that "the demolitions are part of the ongoing religious persecution of Tibetans" inside Tibet.

The DIIR Human Rights Desk concluded by saying "the Chinese government has been systematically repressing the rights of Tibetans to practice and partake in religious rites and rituals. Even Tibetan school children are forbidden from participating in any religious activities during their vacations."

"Tibetan children are barred from joining monasteries and receiving religious education until the age of 18. At the age of 6, the 11th Panchen Lama Gedhun Choekyi Nyima was abducted by Chinese authorities and even after 29 years of his enforced disappearance China refuses to divulge any information about him," it further stressed.

The Buddhist centre is home to thousands of residents, many of whom constructed their homes themselves. The site has been subject to interference from the Chinese authorities, including demolitions and removals of residents, since 2002, with 40 homes destroyed in 2016 so that roads could be built. This latest order to tear down 3,500 homes represents a dramatic increase in demolitions. The order started to be implemented on 12 August, with authorities instructing residents to dismantle their own homes voluntarily. Residents were told that otherwise this task would be carried out by demolition crews, who could damage the materials they used to build their homes.

Faced with the possibility of losing these building materials, many residents complied with this order. The lama who oversees Yarchen Gar offered residents 500 Yuan (around GBP £58 or USD $75) as compensation for the loss of their homes. They were ordered to register their identity cards and to sign and give thumbprints to a document to certify how long they had lived at Yarchen Gar. The document committed residents to return to their native regions of Tibet, 'loving the country and loving the religion' and never returning to Yarchen Gar after leaving.

Situated in a remote Palyul County in the traditional Province of Kham, eastern Tibet, some 4,000 meters above sea level, the religious centre was until recent years home to an estimated 10,000 nuns, monks, and lay practitioners devoted to scriptural study and meditation. The monastery and the educational institute was established in 1985 by the abbot, Achuk Rinpoche who was a Dzogchen practitioner and one of the senior Nyingma masters in Tibet.