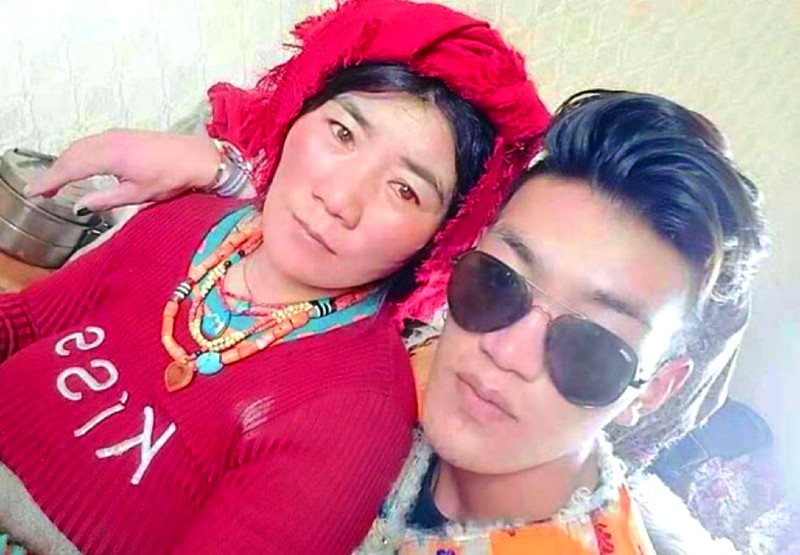 Wangchen and his aunt Donkar were sentenced up to four years in prison. Photo: TPI

Dharamshala, India — A court of China's communist authoritarian regime in eastern Tibet has handed down heavy sentences to a young Tibetan man and his aunt for organsing a conspicuous protest in public against the law of the land and leaking state secrets.

Two other Tibetans were each heavily fined and ordered to attend political re-education classes on “issues of national security” for six months. The source reportedly confirmed that Sershul county is currently under tight lock-down and heightened surveillance.

Wangchen, a young Tibetan believed to be aged in his 20s was sentenced to four and half years in the Sershul County of Karze region of eastern Tibet, while his aunt Donkar, was sentenced to one year and three months, for participating and observing a peaceful act of prayer and for sharing information connected to the event,' a reliable source told the TPI on Wednesday, May 8, 2019.

According to the latest source from Tibet, the so called Sershul County People’s Court in Sichuan sentenced Wangchen to four and half years in prison on charges of organising and leading a conspicuous anti-government protest in public against the law of the land. Wangchen’s aunt Dolkar was sentenced to one year and three months imprisonment on charges of “leaking state secrets” and “endangering the welfare of the state”.

During the hearing at Sershul court on May 8, 2019, Wangchen was seen walking unsteadily, leading some observers to believe he had been tortured in custody. No one was allowed to get close to him to look for signs of trauma, the source added, speaking on condition of anonymity. Their whereabouts and condition remain unknown after they were sentenced, and his family were not allowed to provide lawyers to represent him in court.

Just over a week ago, Wangchen shouted slogans of prayers calling for the release of the 11th Panchen Lama and the reunion of His Holiness the Dalai Lama and the Panchen Lama during a ceremony of hanging of prayer flags on a hill near the Sershul Monastery.

Wangchen, along with three others were detained by Chinese police on their return to the base of the hill. The three others namely Lobsang, Yonten and a third who only witnessed Wangchen’s peaceful protest without taking part were detained. Lobsang and Yonten were each heavily fined 15,000 yuan (US $2,211) and ordered to attend political re-education classes on “issues of national security” for six months.

Wangchen had chanted prayers and shouted slogans while taking part in a prayer ceremony on April 29, 2019 on a hill behind a monastery in Sershul county in eastern Tibet where local Tibetans hanged wind horse prayer flags and conducted smoke offerings, a source previously said. he shouted slogans calling for the release of the 11th Panchen Lama and for the reunion of the 11th Panchen Lama and His Holiness the 14th Dalai Lama in Tibet.

Another Tibetan who is reportedly physically disabled and unable to talk was among the group of four arrested and has now released. But Lobsang, Yonten, and person who was physically disabled—were also detained as Wangchen's accomplices, the source further added.

The source also said that their mobile phones confiscated and internet access blocked. They are now being held at the People’s Court in Sershul County. No one is allowed to meet with them until the court issues a verdict within 15 days.

As the harvest season for caterpillar fungus is coming soon, other local Tibetans gathered on the hillside had advised Wangchen not to shout the political slogans, warned him that he might be arrested by Chinese police. But he responded by saying "more than 150 Tibetans have already self-immolated and that we should shoulder the burden of responsibility,” the source said.