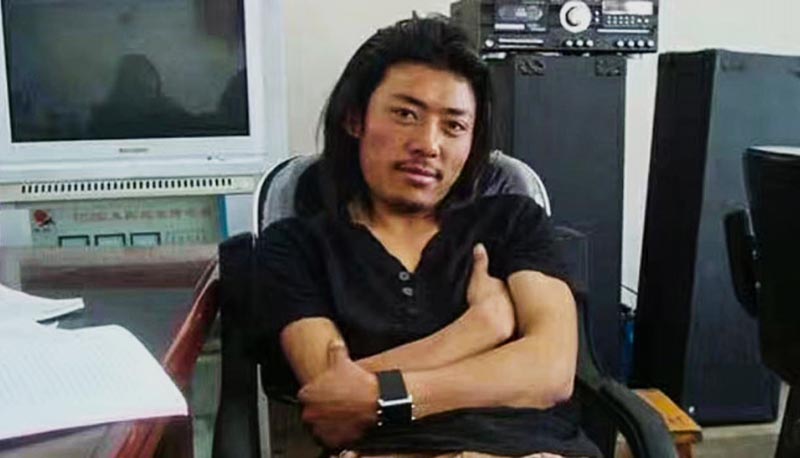 Wangchen, a young Tibetan who had chanted prayers and shouted slogans while taking part in a prayer ceremony in Sershul County, eastern Tibet, on April 29, 2019. Photo: TPI

Dharamshala, India — Chinese authorities in Sershul county in the Kardze region of esatern Tibet have arrested three Tibetans after a man in his 20s shouted slogans calling for the release of the 11th Panchen Lama, who disappeared into Chinese custody as a child in 1995, becoming the world's youngest political prisoner.

The three Tibetan were identified as Wangchen, Lobsang and Yonten and will be tried by a local court in about 15 days. Wangchen, a young Tibetan believed to be aged in his 20s, had chanted prayers and shouted slogans while taking part in a prayer ceremony on April 29, 2019 on a hill behind a monastery in Sershul county in eastern Tibet where local Tibetans hanged wind horse prayer flags and conducted smoke offerings, a local source said.

'Wangchen shouted slogans calling for the release of the 11th Panchen Lama and for the reunion of the 11th Panchen Lama and His Holiness the 14th Dalai Lama in Tibet,' the source said, adding: 'Only Wangchen recited the prayers and shouted the slogans, during an offering ceremony and the hanging of prayer flags on the hill behind Sershul monastery.'

Another Tibetan who is reportedly physically disabled and unable to talk was among the group of four arrested and has now released. But Lobsang, Yonten, and person who was physically disabled—were also detained as Wangchen's accomplices, the source further added.

The source also said that their mobile phones confiscated and internet access blocked. They are now being held at the People’s Court in Sershul County. No one is allowed to meet with them until the court issues a verdict within 15 days.

As the harvest season for caterpillar fungus is coming soon, other local Tibetans gathered on the hillside had advised Wangchen not to shout the political slogans, warned him that he might be arrested by Chinese police. But he responded by saying "more than 150 Tibetans have already self-immolated and that we should shoulder the burden of responsibility,” the source said.