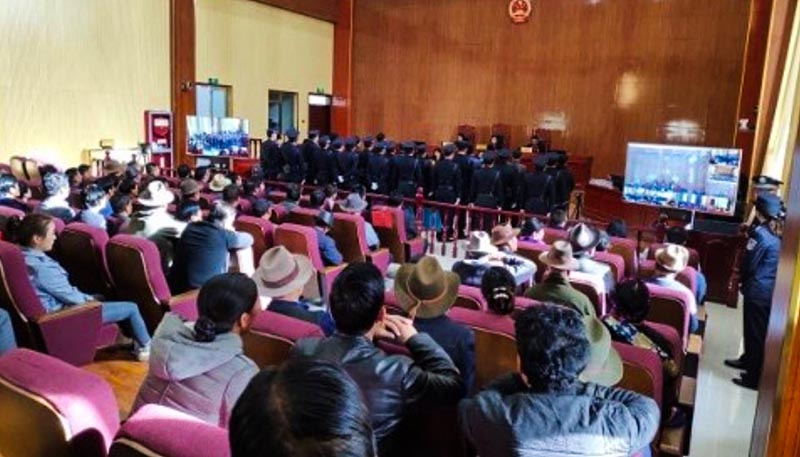 Chinese authorities in Qinghai province have sentenced nine Tibetans to to prison terms ranging between three and seven years for for running an “illegal organisation,” demanding the return of community land taken by authorities but then left unused since 2011.

The nine, all residents of Horgyal village in Rebgong (Ch: Qinghai’s Tongren) county of northeastern Tibet, were handed terms of from three to seven years by the so called County People’s Court for allegedly running an “illegal organisation,” a source said.

Detained in July 2018, the nine Tibetan men were formally arrested in August, to suppress a long-running campaign by villagers to reclaim community land expropriated by local Chinese government for a failed business enterprise, it said citing information provided by sources in the region.

In a petition signed on Feb, 21, 2017, the nine, part of a larger group of 24, had mobilised village support to demand the return of Horgyal village land handed over for use by three brick factories in exchange for lease payments to the village that ended when the works were closed down by government order in 2011. For the next seven years,authorities compensated the factories annually for their loss of business, though payments to the Horgyal village government then stopped and villagers had called since then for the land’s return.

Two years before, a Tibetan monastery in Rebgong had appealed for the return of property formerly leased to a teacher’s college but seized by local officials are the college moved to a new location. The property, comprising one third of the total estate of Rongwo monastery, was confiscated in 2016, and monks had petitioned ever since for its return, sources added.

"This is the first criminal case handled by the Tongren County People’s Court that is related to the three-year nationwide crackdown on organised crime and evil forces announced in January last year,"the Dharamsala, India-based Tibetan Centre for Human Rights and Democracy said on April 19, 2019.

The court ruled that the Tibetans had created an ‘illegal organisation’ of 24 ‘khagovas’ (literally ‘heads’ or leaders’) to control the “two committees” of the village and usurp ‘grassroots political power’ by ‘taking over the duties of the “two committees”’. The court added that the nine ‘ringleaders’ of the organisation ‘maliciously obstructed the government’s land acquisition work and normal construction operations, committed serious crimes that constitute a crime of gathering people to disturb social order’.

Chinese development projects in Tibetan areas have led to frequent standoffs with Tibetans who accuse Chinese firms and local officials of improperly seizing land and disrupting the lives of local people. Many result in violent suppression, the detention of protest organisers, and intense pressure on the local population to comply with the government’s wishes.

The Chinese Communist totalitarian regime began their invasion of Tibet in 1949, reaching complete occupation of the country in 1959. Since that time, more than 1.2 million people, 20% of the nation's population of six million, have died as a direct result of China's invasion and occupastion. In addition, over 99% of Tibet's six thousand religious monasteries, temples, and shrines, have been looted or decimated resulting in the destruction of hundreds of thousands of sacred Buddhist scriptures.