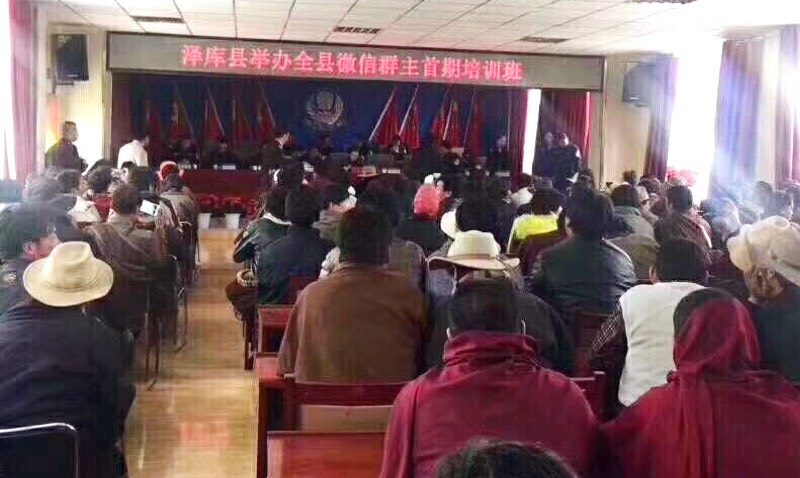 Dharamshala, India — The spiritual leader of Tibet, His Holiness the Dalai lama will turn 83 on Friday, July 5, 2018. And Chinese authorities have increased heavy military presence and renewed online crackdown in Marlho County in Amdo province (Ch: Qinghai), in order to prevent Tibetans inside Tibet from celebrating his birthday.

According to a source from Marlho County, who spoke to the RFA Mandarin service on Tuesday, Chinese authorities have cut off internet connection in some areas. Group members and administrators of popular Chinese messaging app ‘Wechat’ are warned not to send any birthday wishes or disseminate any information regarding birthday celebration. Since last year, Chinese government has came up with ‘9 point’ internet guidelines to crackdown on free speech and information. Violators are severely punished without proper trial.

Malho County in Tibet's traditional Amdo province is a restive area, where arge number of the self-immolation protests have taken placed against Chinese repressive policies. Nearly 20 men and women from the area self immolated against Chinese invasion.

“Ahead of His holiness the Dalai Lama's birthday this year, the Qinghai state authorities first step is to control internet network, and then dispatched military police in various counties, towns and villages. The whole prefecture is in high alert. Every year, during Tibetan New Year, commemorative activities related to the Dalai Lama and the political-related anniversaries, Tibetans in the territory gather privately to pray and celebrate the occasion," the source said.

"There were numerous account of Tibetans demonstrating, holding Dalai Lama’s portrait and expressing their displeasure to the Chinese rule. The Chinese authorities have always adopt more stringent control over Tibetan areas during special occasion, with the blockade of the Internet and telephone communications in order to prevent news and video of self-immolation and demonstrations from going abroad”, it added.

Heavy military and police presence is also felt in Zekor county in Marlho, Amdo, north-eastern Tibet. According to another source, who spoke on condition of anonymity, fearing Chinese reprisal said, “There are military everywhere. Internet police also strictly monitors the network these days. Because His Holiness the Dalai Lama birthday is coming. And the authorities are carrying out the so-called ‘special struggle for sweeping the black and evil’ in the whole Tibet, which has caused panic among Tibetan."

"In September last year, the authorities in Zekor County, Amdo forcibly convened nearly 250 Wechat group administrators to receive legal education and forced to sign letter of responsibility. Making them to cooperate with the authorities on the ‘separatism’ and people fighting for independence. With the His Holiness birthday in few days, the Wechat group administrators have been warned not to give any platform to their members to speak on sensitive topics or face severe consequences" it further added.

China has worked really hard in recent years to control spread of information from Tibet. In a report published by Freedom House, Tibet is less accessible than authoritarian state, North Korea.

Tibetan Spritual leader will turn 83 on Friday. He fled Tibet after a failed uprising against Chinese invasion. This year he will celebrate his birthday in Leh, Ladhak.