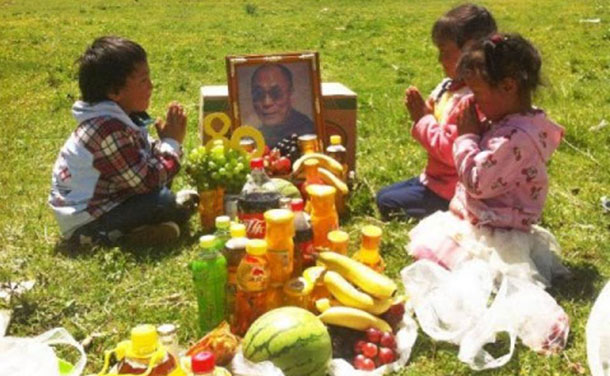 Celebrating the 80th birthday of His Holiness the Dalai Lama inside Tibet. Photo: TPI file

Dharamshala, India — Two Tibetan businessmen were detained by Chinese authorities in Rimakor, kham region of eastern Tibet over possession of His Holiness the Dalai Lama photos.

The arrest comes after local authorities in Kardze County have been carrying out tighten control and ‘clean up campaign’ against bad social elements in run up to His Holiness the Dalai lama birthday, according to local sources who spoke exclusively to the US based Radio Free Asia Mandarin Service.

Both the businessman own restaurant and they were both arrested in early June. The report also said that they were both held in detention since the arrest.

Police in Kardze County of Kham region have been conducting raid and carrying out home searches. Recently the local authorities are also forcing Tibetan monasteries to send small monks’ to public schools, according to the report.'

Tibetan’s loyalty to His Holiness the Dalai Lama- the spiritual leader of Tibet is seen by Chinese authorities as threat and direct contention to their authority and rule. Tibetan people in possession of his holiness photo are put in prison and meted severe punishment.

This arrest and clampdown in Kardze, Kham is not the first time. Similar incident were reported by UK based human rights watch Free Tibet in 2017, where Public security bureau issued explicit prohibition on the sale or display of His Holiness image.

The Nobel Peace laureate fled Tibet into exile in 1959 after failed a national uprising against Chinese rule. He have been living in Indian town of Dharamashala. A small town, perched upon lower reaches of Himalaya ever since.