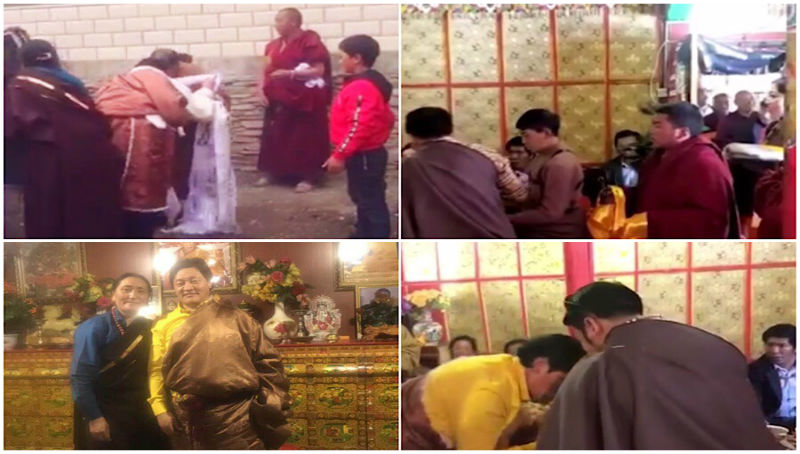 Dashar with ceremonial scarves and gave him a warm welcome upon his arrival, Sershul County, eastern Tibet. Photo: TPI

Dharamshala, India — A Tibetan man from Sershul County, eastern Tibet jailed for ten years for peacefully protesting China's repressive rule in Tibet in 2008, has been released after serving 10 years in Chinese prison.

Dashar aka "Dawa Sharlo who had served his full term behind bars but was held for "an additional two months before his release," his daughter Tenzin Nyidron from Australia told TPI, adding: “On his arrival, his relatives and friends welcomed him with Tibetan ceremonial offering scarves."

'Dashar and his father Agye Rinpoche from Sershul County of eastern Tibet, were arrested in 2008 following their involvement in the widespread protests that took place throughout Tibet that year,' sources said, adding: 'Dasher's father who is spiritual master of the Dza Wongpo Monastery, was arrested on March 15 and later sentenced to five years in prison.'

Chinese authorities arrested 14 monks in front of the Jokhang Temple in Lhasa, Central Tibet for involving in widespread peaceful protests in 2008. Eight of them were from Dza Wonpo monastery in Sershul County of eastern Tibet. Agye Lama Rinpoche, owner of the Monastery, who had just returned from India to Lhasa, and his eldest son Dashar were arrested by the Chinese police in Lhasa, the capital of Tibet, in March 2008.

When asked about his current state of health, she said: “My father and I spoke only for two minutes, he told me he is in good health and he was very happy to be reunited with his family members. But from the recent photographs, he appeared physically weak. He will be seeing soon by a doctor in a hospital, so the exact condition of his health should be more clear to us."

"Dashar’s prison term expired on March 15, but he was kept in prison for another two months and was released on May 15th. We don’t know what the reasons were for the delay,” sources said.

"It was one of saddest moments in my life when I heard my grant father was beaten and tortured by Chinese police in front of my father in the Chinese prison," Nyidron stressed.

Dashar hails from Sershul County of eastern Tibet (Ch: Shiqu County of Ganzi Prefecture), had taken part peaceful protest in the capital Lhasa of Tibet on March 14, 2008 and was later charged with inciting “separatism” and handed a 10-year prison term.