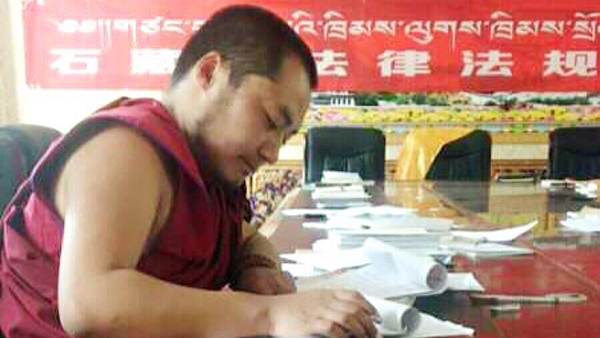 Dharamshala — A Tibetan Buddhist monk was detained by Chinese police in Ba county, north eastern Tibet on suspicion of sharing politically sensitive content on social media and is being held at an undisclosed location with his current condition unknown.

Woechung Gyatso, a Buddhist monk at the Tsang monastery in the Ba county of northeastern Tibet, was taken into custody after taking part in March in a Chinese-led workshop on cyber security, sources said.

Recently, the monks of Tsang monastery were summoned for a political education workshop on China’s cybersecurity laws and regulations, according to the Dharamsala-based Tibetan Centre for Human Rights and Democracy.

At that time, several Tibetan monks including Woechung Gyatso were forced to write self-criticism letters for having posted pictures and articles on their personal web chats that were deemed to have broken the law.

The violations were discovered after police investigations into the suspects’ personal social media accounts, the group said, adding that on April 16, police from Ba, also called Gepasumdo, county took Gyatso and another Tsang monastery monk into custody.

The other monk was later released, but the Chinese police are still holding Woechung Gyatso. Due to heightened restrictions in the area, no details on Gyatso’s present whereabouts or condition can be obtained.

China’s Cybersecurity Law, which came into effect in June 2017, “violates individuals’ right to freedom of expression, opinion and information,” TCHRD said in an April 18 statement.

Detained under vague and overbroad charges such as ‘leaking state secrets’ and ‘inciting separatism,’ Tibetans are subjected to arbitrary arrests, detention and torture for exercising their right to freedom of expression on the internet,” the rights group said.