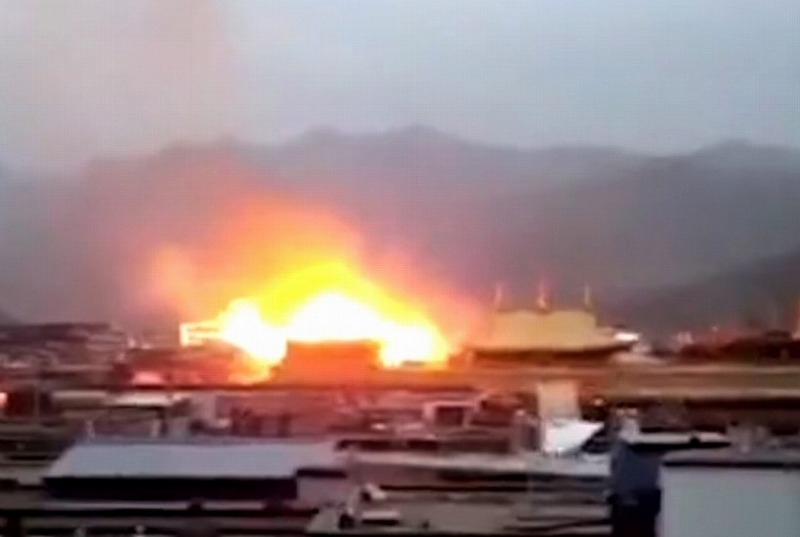 A still from video circulated online of the temple fire.

Dharamshala — Last week videos showing Lhasa's Jokhang temple in flames circulated social media sparking concerns for Tibetans all over the world. In the aftermath of the fire on February 17, questions have also emerged over Chinese censoring of the event.

China's Xinhua also reported that while an area of 50 square meters was burned during the fire, “6,510 cultural relics” within the UNESCO world heritage site were intact and accounted for by the regional cultural relics bureau. The report also said that arson has been ruled out as the cause of fire.

However, Tibetans abroad have questioned the authenticity of China's claims, knowing that Chinese authorities have all but completely suppressed information coming in and out of Tibet.

Reportedly, within hours of the fire, photos, videos and other posts on social media were censored and wiped out by Chinese authorities, sources said, in an attempt to veil the incident.

Robbie Barnett, a prominent Tibet expert told LA Times, "There's been this whole process of drip-feeding critical information to certain people, anonymously, unattributed. Key Tibetologists are getting this information; key foreigners in China are getting these accounts. But nobody outside knows where they're from, and we don't know which of the photos or stories are genuine."

The head of the information department of the Central Tibetan Administration, Dhardon Sharling, said that the incident has, "panicked the whole world, there's no information except for two reports saying that the fire has been put out and the site has been reopened. That's not enough."

The limited information emerging from the region, from which foreign journalists are barred, means that it continued to be difficult to assess the extent of the damage.

The Jokhang Temple is located in the heart of Lhasa and is considered both one of the holiest and most politically sensitive sights in Tibet. The UNESCO World Heritage Site has seen several protests over the years, and also sees thousands of devotees who pray at the site every day.