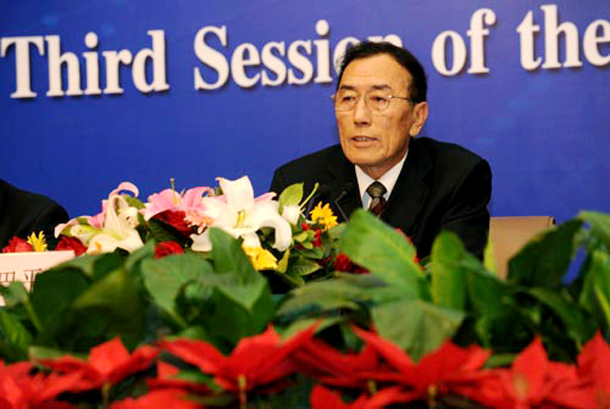 Dharamshala — A top Tibetan official in Tibet has urged that the central government needed to do more to tackle discrimination of ethnic minorities at railway stations, airports and ports in China, including Tibet Autonomous region, China's state-controlled media said Tuesday, December 22.

Ethnic minorities are sometimes discriminated against when going through security checks at railway stations, airports, ports and border crossings, or when checking into hotels or visiting shopping malls, Mr Jampa Phuntsok (Ch: Qiangba Puncog), the Chinese-appointed former governor of Tibet, said in a report reviewed at the 18th meeting of the 12th Standing Committee of the National People's Congress (NPC).

"In recent years, there have been recurring instances where people with ethnic backgrounds, were discriminated against or denied access to certain service trades," the report quoted him as saying.

Mr Phuntsok said transport hubs and security checks at border posts and hotels had seen this problem. Despite repeated efforts to implement China's ethnic policies, the problem had "generated unwanted social impact and caused strong public reactions from ethnic regions", he said, adding that "Such practices which run counter to the regional ethnic autonomy law must be resolutely rectified."

The report, made by a lawmaker from the so called Tibet Autonomous Region (TAR), concerns the work of implementing the law governing regional autonomy for ethnic minorities in China, another state-run media 'Global Times' said in its report without identifying the Tibetan official.

Discrimination problems have not been eradicated despite the efforts of the cabinet and many governmental departments to correct them by issuing documents concerning such issues, and the problems have caused "strong dissatisfaction" among people in ethnic areas, the report said.

The report claimed that this is the second time that the NPC Standing Committee has inspected the enforcement of the law on regional autonomy in the last 31 years since it took effect. The report also pointed out that ethnic autonomous regions face more pressure to build an affluent society than other parts of the country.

In 2014, the economies of 30 autonomous prefectures across the country combined were smaller than that of the city of Suzhou in Jiangsu Province, it said. Basic infrastructure in those regions also lags behind that in other parts of China.

Of the country's 138 border counties, 109 are located in autonomous regions, and as of 2013, 99 of them had no expressways. Some 6.1 million people in border counties lack electricity, it said. So called Han Chinese constitute approximately 93% of the population of China.

China has tightened its grip on national security in response to the threats of terrorism and separatism, especially in Tibet and East Turkestan (Ch: Xinjiang), where more stringent security measures are in place, the Global Times report.

Chinese occupied territories like Tibet, East Turkestan and Inner Mongolia, which are officially self-governing regions with large minority populations, are supposed to have large-scale autonomy, though in reality, Beijing holds the reins.

Security was stepped up in Tibet in the last few years following a spate of self immolation protest against Chinese government's repressive policies and denial of the fundamental freedom of the Tibetan people.