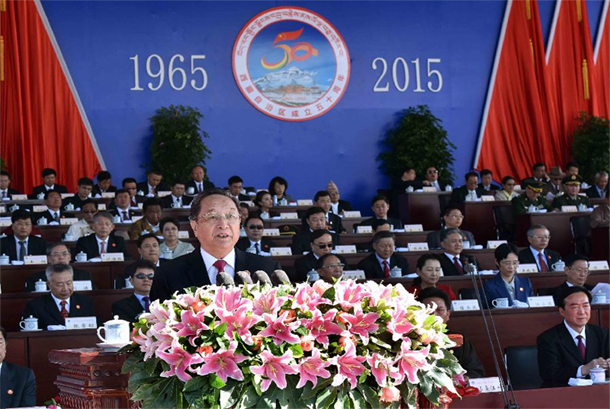 Dharamshala — China held a mass ceremony in occupied Tibet to mark the 50th anniversary of the founding of the Tibet Autonomous Region (TAR)— in its latest politicized white paper, the communist regime said "Tibet is now in its golden age."

State run television showed officials who addressed the invited audience pledging to defeat what they claimed were repeated attempts by the exiled Tibetans led by the Dalai Lama, to split Tibet from China.

On a specially erected stage in a square beneath His Holiness the Dalai Lama's former residence, the Potala Palace in Lhasa, the capital of Tibet, Chinese politburo member Yu Zhengsheng praised the creation of what he called a "vibrant socialist new Tibet" since the TAR was founded in 1965.

The ceremony, which was followed by a parade through the capital, comes against a backdrop of tension in Tibet, with more than 130 Tibetan Buddhist monks, nuns and ordinary Tibetans reported to have set themselves on fire since 2009, in protest at Chinese rule and what they say are repressions and restrictions on their culture and religion, including the imposition of political study sessions in monasteries.

However, Yu Zhengsheng told an invited audience consisting of several thousand people in traditional Tibetan dress, and a large number of soldiers -- but apparently few monks -- that Tibet had been transformed from a backward society over the past half century.

He stressed that GDP had grown 68-fold during that period, and said that freedom of religious belief in the mainly Buddhist region had "been fully respected and protected in Tibet over the past 50 years," state media reported.

The officials did not make any reference to the deadly Cultural Revolution of the 1960s and 1970s, when historians say 1.2 million Tibetans were killed and monasteries were completely destroyed --remaining of them heavily damaged -- and monks jailed, nor to what international human rights groups say are "restrictions" on the practice and teaching of Buddhism in contemporary Tibet.

But Yu did touch on current tensions, referring to an ongoing "struggle against separatism ... and foreign hostile forces' splittist and sabotage activities." State media also reported that he had earlier urged Tibet's army, police and judiciary to be ready to "fight a protracted battle against "the clique of the 14th Dalai Lama."

In an apparent attempt to appease criticisms, Yu said that "religious affairs should be managed according to law" and problems should be addressed through "legal thinking and judicial means." But he made it clear who was in charge, saying that "only by sticking to the Communist Party's leadership" and the current administrative arrangements could Tibetans "be their own master."

The ceremony, which follows another white paper on Tibet, setting out government plans to modernize the region's economy, comes amid renewed tension between Beijing and Dharamshala. China has repeatedly refused to hold talks with the envoys of His Holiness the Dalai Lama, who says he does not seek "independence" from China, but only "genuine autonomy." However, Beijing has accused him of being a separatist.

Tibet is "now in its golden age," according to a Chinese government paper released ahead of the 50th anniversary of the autonomous region's foundation.

Tibetan people fulfill the right to participate equally in the management of state affairs, China's State Council Information Office said in an eight-chapter white paper released by the official Xinhua News Agency on September 6.
The people are managers of local social affairs and masters of their own destiny, creating and sharing the material and spiritual wealth of Tibet, according to Xinhua.

But Tibetans say monks are persecuted and their religion repressed, traditional customs are attacked, and their opportunities for employment are limited. Furthermore, they say, Tibet's natural environment has been severely degraded by government projects, and the regime has introduced Party education and indoctrination in Tibetan schools.

Chinese authorities have also encouraged the immigration of Chinese, which Tibetans complain has the effect of limiting their living space with colonial ideology of domination— disenfranchising them in their own homeland.