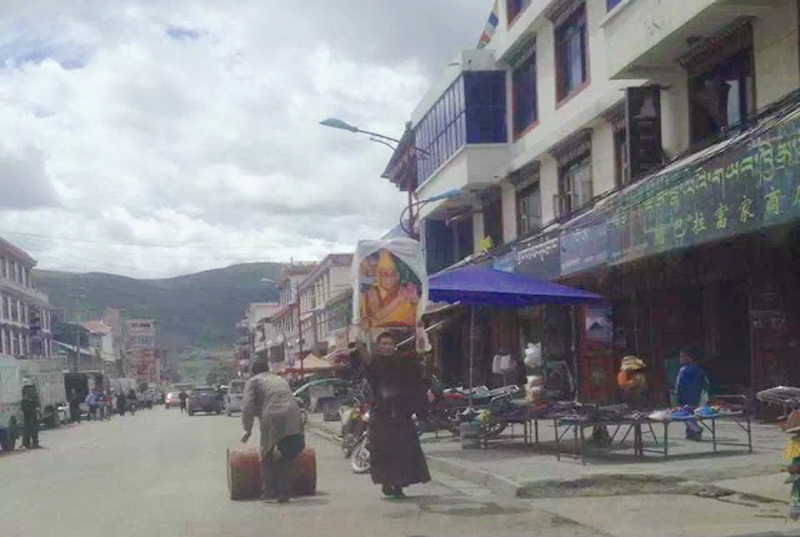 Dharamshala — Sources coming out of Tibet say another Tibetan Buddhist monk was detained by Chinese authorities in Ngaba County, eastern Tibet for staging peaceful protest against the Chinese government rule and shouting slogans calling for freedom in Tibet.

"Jampal Gyatso, aged about 21, took to the main street of Ngaba town, carrying a portrait of His Holiness the Dalai Lama," and shouted slogans calling for "freedom for Tibetans." Chinese authorities arrived at the scene within minutes and arrested him.

"Gyatso was arrested after he staged a solo demonstration against the Chinese government around 12:00 am on September 9," Ven Kanyag Tsering, a monk with close contacts in the Tibetan region, told the Tibet Post International (TPI).

In a brief video footage received by the TPI from inside Tibet, Gyatso is seen walking along the streets of Ngaba County town, holding aloft a huge portrait of His Holiness the Dalai Lama, hurled prayer flags into the air and raising slogans for "freedom in Tibet".

On Monday, Lobsang Kalsang, another Kirti monk, was arrested after a similar protest against the Chinese government where he called for the return of His Holiness the Dalai Lama to Tibet and freedom for Tibetans. Both hailed from the same township of Meruma in Ngaba County.

The Chinese authorities are clamping down on the contents of popular social media, and particularly on the posting of photos, videos, and text that could be considered to be anti-China.