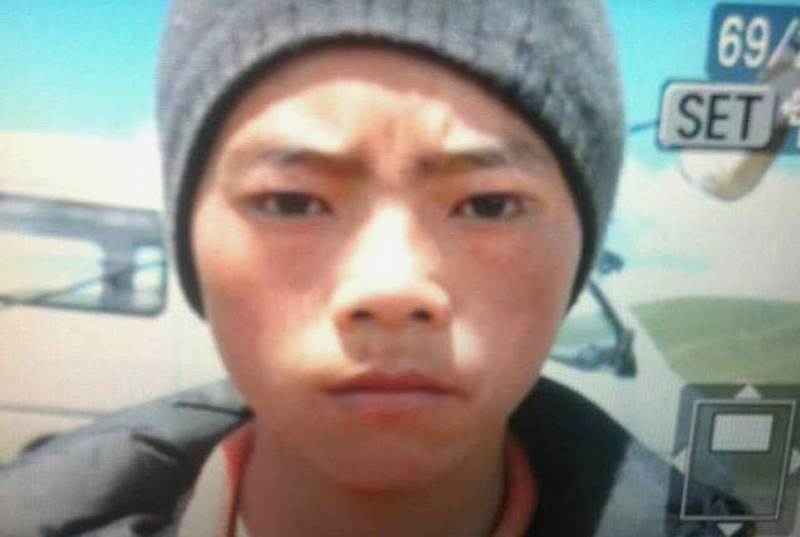 Dharamshala — Chinese authorities have arrested a teenage Tibetan boy in Lithang County of eastern Tibet for staging a peaceful and lone protest against the Chinese government's repressive policies in Tibet.

The teenage boy identified as Lobsang Thupten, a 17-year-old nomad from Lithang County, Kham province of eastern Tibet. "A group of armed police arrived shortly after his protest and took him away in a police car," he said, "his current whereabouts and condition remains unknown."

According to the sources, "holding a portrait Thangka of His Holiness the Dalai Lama, Thupten staged the protest with a peace march in front of a police station in Lithang County in Eastern Tibet (Ch: Litang County, Ganze Prefecture, Sichuan Province, China)."

"He condemned Chinese failed policy and oppression in Tibet," the monk said, adding "Thupten's banner made references to human rights, freedom and the return of His Holiness the Dalai Lama to Tibet."

"Paramilitary police and armed forces with a large number of armored vehicles have been deployed in the County," sources said, "armed forces have grown significantly over the weeks."

A number of latest images from the region also indicated that the County remains tightly controlled under heavy surveillance and PLA security forces maintain a heavy presence in an attempt to avoid further protests.

His arrest took place over a month after a respected Buddhist teacher from the County died in Chinese prison under suspicious circumstances while serving life sentence. Runggye Adak, another prominent political prisoner, from same County, was released on July 31, after completing his sentence.

Sources also say that the county has been under heavy security restriction in the recent weeks and severe restrictions were placed on the movement of Tibetans in the region.