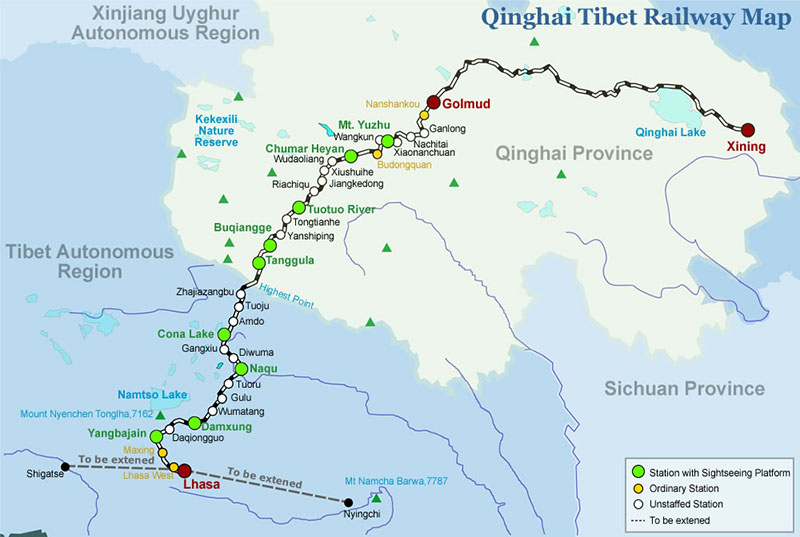 Dharamshala: - The Central Tibetan Administration (CTA) expressed concerns on Thursday about the Chinese government’s plans to extend a railway line linking Tibet and the rest of the country to the borders of India, Nepal and Bhutan by 2020. There is speculation that the rail line will threaten the unique cultural identity of Tibetan people.

"The railway network will accelerate the mass movement of Chinese migrants into Tibet which threatens the unique cultural identity of the Tibetan people through forced assimilation," the Dharamshala based Tibetan administration said on Thursday.

China opened its 1,142 km railway line from Golmud in its Qinghai province to Tibet's capital Lhasa in 2006. The 253 km Lhasa-Shigatse link, which includes 13 stations with altitudes ranging from 3,600 to 4,000 meters, is the largest investment project in the Tibet Autonomous Region in the 12th Five-Year Plan, Chinese state media reported.

Another report published by The Economist in June this year, stated that over 7.5 million passengers rode the railway from Golmud to Lhasa in 2013 alone — more than the entire population of Tibet itself.

The Chinese railway projects have also led to a rapid increase in Chinese mining companies and workers entering Tibet to exploit its natural resources.

Moreover, with the influx of the mining companies and rampant exploitation of Tibet's resources, the ecological balance of the fragile Tibetan plateau is exposed to severe risks of disasters. In March 2013, over 80 miners were buried alive after a major landslide hit a part of the Gyama Copper Gold Polymetallic Mine near Lhasa, prompting fears of similar disasters in other parts of Tibet where mining is rampant.

The Environment and Development Desk (EDD), the environmental research desk of the Central Tibetan Administration, have called the Gyama mine disaster as "a man-made phenomenon rather than just a 'natural disaster". They claimed that the tragic incident is a result of aggressive expansion and large-scale exploitation of mineral in the Gyama Valley.

The mass influx of Chinese migrants into Tibet has also led to illegal land grabs by unscrupulous Chinese businessmen and authorities. Tibetans inside Tibet have protested against illegal land grabbing of their lands and rampant exploitation of mineral resources.

The CTA stated it has 'repeatedly said that cultural assimilation and environmental destruction are two of the major causes which drive Tibetans to set themselves on fire in protest against the Chinese government.' (White Paper on Self-Immolations)
China's expansion of its railway lines towards Tibet's borders have also aroused fears and apprehension among its neighbors particularly India, with which Tibet shares a 3500 km long border.

In its efforts to forge closer ties with Nepal, Indian foreign minister Sushma Swaraj will head to Kathmandu on Friday to prepare the way for Prime Minister Narendra Modi's August visit, the first by an Indian prime minister in 17 years. India will offer Nepal a landmark pact to help develop its huge hydro-electric power potential as the South Asian giant takes another step to re-assert influence among smaller neighbors where China has been forging closer ties, Reuters reported.

With the centrist Nepali Congress in charge in Kathmandu after the Maoists, India had a better chance of improving ties, said Reuters quoting Alyssa Ayres, a former U.S. State department official and a South Asia expert at the Council on Foreign Relations.

"Given the increasing Chinese footprint in Nepal – as a development partner, foreign investor, military supplier and a power increasingly shaping how Nepal treats Tibetan refugees – India would surely want to shore up its own ties to ensure Indian influence doesn't dissipate," Ayres said.