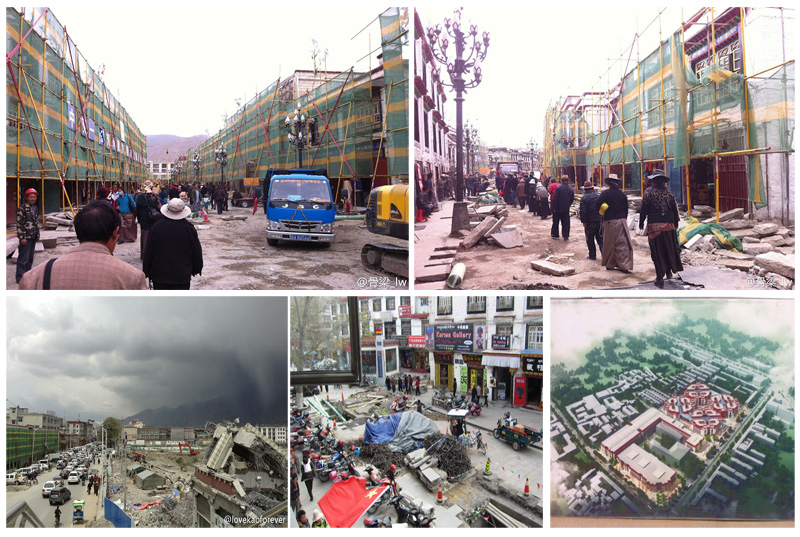 Dharamshala: - - Ignoring both religious freedom and the outcry of the Tibetan people, the Chinese authorities have begun demolishing the ancient capital of Lhasa, including one of the most important Buddhist sites of the city, Tibet's holiest Jokhang Temple.

Chinese authorities are planning to destroy the ancient Buddhist capital of Lhasa, and replace it with a tourist city similar to Lijiang. "Shangri-La" in Yunnan Province. Several large-scale construction projects are underway for a number of shopping malls around the Buddhist holy temple as well as underground parking at Barkhor Street.

"Traditional Tibetan buildings in this ancient city are once again facing the destruction crisis under Chinese modernization", well-known Tibetan writer Woeser told the RFA Mandarin section. She is also appealing to the global institutions, including UNESCO and Tibetans around the world to 'save Lhasa.'

Woeser, who is currently living in Beijing, has published an article on her blog-page (Sunday, May 5) with pictures of the ongoing construction in the ancient city of Lhasa. She has called for a global intervention in the serious situation in the city, where thousand year-old traditional buildings are being destroying by the Chinese in the name of modernization and social stability.

'The construction project in the areas of Barkor streets of the Jokhang temple covers an area of 150,000 square meters to use as new shopping malls and 1,117 square meters for the underground parking spaces", said the sources.

Woeser said many recent visitors already raised strong concerns over the constructions as well as the fate of Lhasa. She expressed her concern over the Chinese authorities' activities and condemned them for demolishing the ancient symbols of Tibetan civilization.

She alludes to photos of the ongoing constructions that she has received, "The photos reflect the situation in the old town of Lhasa, it is a serious matter of concern."

Woeser claims that this is an unlawful act, aiming directly at multiple targets. There is an old Tibetan saying: 'One stone for two birds', which springs to mind.

She said its not only just for economic development, there are other targets. If we look carefully at the photos of the shopping mall project, there are several requirements for alterations of the Tibetan old city, including one called 'evacuation'. This means clearing vendors from the Barkhor streets, perhaps better named 'destruction.'

The Tibetan writer said China was criticized after converting the two ancient Chinese cities; Lijiang in Yunnan and Hunan city into modern tourist cities, with both projects now widely seen as poor decisions.

In fact, such reconstruction has already occurred in Tibet. China now wants the Tibetan Autonomous Region to become like the Zhongdian City (Tibetan: Gyalthang county of eastern Tibet). After the reconstruction, Lijiang was changed to "Shangri-La", mainly to attract tourists. She said this kind of destruction has caused great damage and should be considered 'tourist colonialism'.

The Chinese government is also set to expand various so-called 'interests', including governmental and economic measures, regardless of the consequences. The regime is seeking to further "maintenance in social stability", meaning the authorities have significantly increased surveillance and monitoring in the region, particularly in Lhasa city, prompting an escalation of security measures.

The Potala Palace was added to the UNESCO World Heritage List in 1994. In 2000 and 2001, Jokhang Temple and Norbulingka were added to the list as extensions to the sites. Rapid modernization has been a concern for UNESCO, however, which expressed concern over the building of modern structures immediately around the palace, which threaten the palace's unique atmosphere.

The Chinese government responded by enacting a rule barring the building of any structure taller than 21 meters in the area. However, sources stated that there are new modern buildings higher than 21 meters to be found in the vicinity. Woeser further stated that Jokhang Temple in Lhasa City should be granted protected status under UNESCO's cultural heritage regulations.

UNESCO was also concerned over the materials used during the restoration of the palace, which commenced in 2002 at a cost in millions of dollars, although the Chinese authorities have promised that only traditional materials and craftsmanship were used.