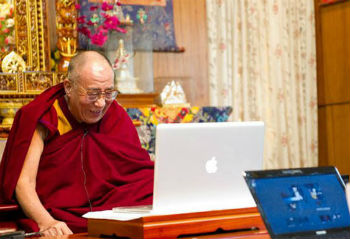 His Holiness, the 14th Dalai Lama is the spiritual leader of the Tibetan people and their greatest advocate for a free Tibet. He travels the world spreading his message of peace, non-violence, and compassionate responsibility for his fellow man. He is the epitome of a selfless individual, often stating that he is a simple Buddhist monk. He has authored or co-authored more than 110 books, ranging from philosophical to inspirational to ethical subjects.

The Dalai Lama is the spiritual leader of the Tibetan people and their greatest advocate for a free Tibet. Born to a farming family in northeastern Tibet, at the age of two, the child, then named Lhamo Dhondup, was recognized as the reincarnation of the previous Dalai Lama. Presently in exile due to the Chinese occupation of Tibet, he travels the world spreading his message of peace, non-violence, and compassionate responsibility for his fellow man. He is the epitome of a selfless individual, often stating that he is a simple Buddhist monk. He has authored or co-authored more than 110 books, ranging from philosophical to inspirational to ethical subjects. Currently, His Holiness is working with psychologists, neurobiologists, physicists and cosmologists to create a collaboration between Buddhist monks and the scientific community. The Dalai Lama has won numerous humanitarian and scholarly awards, among them the Nobel Peace Prize. Surprised to find that money went with the prize, he answered, “Wonderful. There’s a leper colony in India I’ve wanted to give some money to” (Goleman 2015, 6). He is a selfless spiritual example and is a tireless activist for humanitarian causes.

The Buddhists believe that the Dalai Lama is continually reincarnated to fulfil his role of teaching enlightenment to the world. “The Dalai Lamas are believed to be manifestations of Avalokiteshvara or Chenrezig, the Bodhisattva of Compassion and the patron saint of Tibet. Bodhisattvas are realized beings inspired by a wish to attain Buddhahood for the benefit of all sentient beings, who have vowed to be reborn in the world to help humanity” (His Holiness the 14th Dalai Lama Of Tibet 2008, 24). Once chosen as a child, he was schooled in philosophy and debate, among other subjects, and groomed to fill his role as the leader of the Buddhist religion in Tibet.

When Communist China invaded Tibet in the 1950s, he escaped to India and resides there in exile. Today, the Dalai Lama spends his time travelling around the world. He talks with everyone, from the leaders of modern nations to people living in slums. Freed from the routine concerns of daily life, he travels seeking wisdom and to pass knowledge and wisdom on to whomever he meets. He meditates, reflects and seeks to help the world become happier, wiser and more enlightened.

The first Dalai Lama was born in 1391 in Tibet. He founded a philosophical school in 1416 and later founded the Tashi Lhunpo monastery. He wrote more than eight books on his insight into the Buddha's teachings and philosophy and died at the age of 84. Since then, there have been thirteen more Dalai Lamas throughout the centuries. The name itself comes from the Mongolian King Altan Khan who conveyed upon the then leader the title of Dalai Lama, which means “Ocean of Wisdom.” (Chronology of the 13 previous 2016, 24). In 1649, Sunzhi, the Manchu emperor, invited the Dalai Lama to Peking, where he established schools that taught Mongolian, Sanskrit, astrology, poetry, and administration.

Since then, not all the chosen embraced the ordained life. The sixth Dalai Lama renounced even the vows of a novice monk, spending days with his friends in the park and nights in taverns drinking and singing songs. The rest, however, followed their prescribed path. The thirteenth Dalai Lama, born in 1876, went through the British invasion of Tibet in 1904 and the Chinese invasion in 1909. In 1911, when the Tibetans expelled the Chinese from Tibet, the Dalai Lama returned to Tibet to modernize the land, establishing post offices, schools and police. He also introduced the first Tibetan currency. He died in 1933 at the age of 58 before “accomplishing his goal for Tibet's modernization” (Chronology of the 13 previous 2016, 36). For more detailed information, please refer to the www.dalailama.com/the-dalai-lama/biography-and-daily-life/brief-biography.

According to the Dalai Lama, our prime purpose in this life is to help others. And if you can't help them, at least don't hurt them. This is the most important concept that the Dalai Lama is trying to convey to the world. He is accomplishing this by teaching, publishing, and working with others around the world. One of his many books, the “Book of Joy” written with Desmond Tutu teaches that joy comes from within, not from material possessions, and that happiness comes from helping others.

The importance of the Dalai Lama is the fundamental understanding that those who are underprivileged and underserved are in the greatest need of our compassion. For us to understand compassion for others, we must first understand the challenges they face. He teaches focused compassion through education, which leads us to challenge our convictions and take action to help others.

Ties to the Philanthropic Sector

The Dalai Lama also has ties to the Everyone Matters campaign, joining world leaders, celebrities, and common citizens in advocating everyone’s right to dignity and respect, no matter their race, ethnicity, sexual orientation, religion, weight, or anything else. He attends conferences all over the world teaching his message of focused compassion for others. In his view, a person must have empathy for another to have compassion and understanding for others, no matter what their position.

Openness - The Dalai Lama believes that we must be willing to open ourselves to others, even strangers, in order to form true and profound bonds based on our common humanity. He has said, “Look at situations from all angles, and you will become more open.” By trying to be open to other’s points of view, we sometimes may change ours as well.

Giving and Receiving – The Dalai Lama teaches that one should visualize their most selfish self and compare that to a group of destitute people in dire need of help. Most people would recognize that the needs of the many are more important than the needs of the one. Another quote from the Dalai Lama: “Judge your success by what you had to give up in order to get it.” What can you get by giving to others? More than you might expect.

Empathy – There is a Tibetan phrase that translates to “the inability to bear the sight of another’s suffering… Our innate capacity for empathy is the source of that most precious of all human qualities, which in Tibetan we call nying je. Now while generally translated simply as “compassion,” the term nying je has a wealth of meaning that is difficult to convey succinctly, though the ideas it contains are universally understood. It connotes love, affection, kindness, gentleness, generosity of spirit, and warm-heartedness” (D. Lama 1999, 73). If we can feel that for others, we may be motivated to make changes to improve everyone’s lot in life. One last quote from the Dalai Lama: “If you want others to be happy, practice compassion. If you want to be happy, practice compassion.”

Important People Related to the Topic

Saint Teresa of Calcutta (August 26, 1910 - December 5, 1997) - The Dalai Lama admired Mother Teresa and had the deepest respect and affection for her. After meeting her, he said she was a wonderful example of a compassionate person. Often, he told Buddhist monks and nuns to follow her example and serve the poorest of the poor in an imitation of her generous nature, her kindness and her concern for others.

Azim Premji (July 24, 1945 - present) – This man led Wipro to widespread success and was the first Indian to sign up for the Giving Pledge initiative started by Microsoft founder Bill Gates and billionaire investor Warren Buffett. The Dalia Lama admired that he was taking practical steps to help others through his educational foundations.

Archbishop Desmond Mpilo Tutu OMSG CH (October 7, 1931- present) – A South African Anglican cleric and theologian, he is known for working as an anti-apartheid and human rights activist. When he met the Dalai Lama, they instantly became close friends and wrote “The Book of Joy” together.

Reflection Question - After reading the Dalai Lama’s prayer (below), how do you think you can make a difference in this world?

Ethics for the New Millennium

May I become at all times, both now and forever

A protector for those without protection

A guide for those who have lost their way

A ship for those with oceans to cross

A bridge for those with rivers to cross

A sanctuary for those in danger

A lamp for those without light

place of refuge for those who lack shelter

And a servant to all in need.

Articles about the Topic Dalai Lama: Peace and happiness

The Beauty and Glory of Nature!

Why do we love Mountains?

Demilitarisation can be achieved through inner disarmament: His Holiness

We all have a responsibility to work for the cause of Tibet: His Holiness the Dalai Lama

His Holiness the Dalai Lama speaking to a group of Indian scholars at his residence in Dharamsala, HP, India on January 24, 2019. Photo: Ven Tenzin Jamphel

Make Buddhist science as an objective academic context: His Holiness the Dalai Lama

As long as we have compassion, we’ll be physically and mentally fit: H.H the Dalai Lama

"SEEL" tackling the emotional crisis: A gift to humanity by His Holiness the Dalai Lama of Tibet

We should seek a demilitarised world for peace: His Holiness the Dalai Lama

Atheist China has no say in the reincarnations system of Tibet: Tibetan President

Power of truth stronger than that of Guns': His Holiness the Dalai Lama on China

Compassion in action: His Holiness the Dalai Lama praises nurses, doctors on the front lines

60th Democracy Day pays tribute to its pioneer, His Holiness the Dalai Lama of Tibet