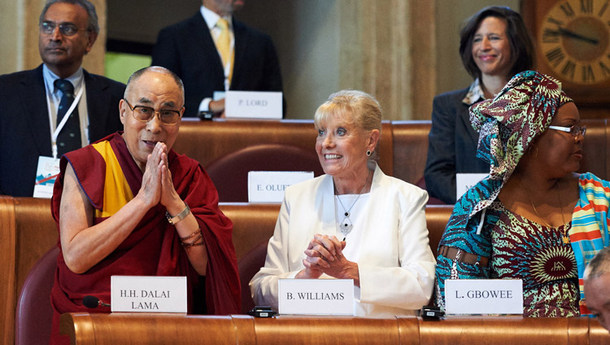 His Holiness the Dalai Lama and Betty Williams at the 14th World Summit of Peace Laureates in Rome, Italy on December 14, 2014. Photo by Olivier Adam

Dharamshala, India — On the passing away of Betty Williams, a Nobel Laureate and one of the founders of the Peace People, The spiritual leader of Tibet, His Holiness the Dalai Lama expressed his sympathy in a letter to her nephew, Lawrence Lovell.

Betty Williams, a grassroots activist who shared the 1976 Nobel Peace Prize as the founder of a protest movement that mobilized tens of thousands of people to demand an end to sectarian violence in Northern Ireland known as Trouble, died on Tuesday. She was 76 years old.

“With her death, we have lost a dear friend who dedicated herself to counter the use of violence in resolving conflicts,” the spiritual leader of Tibet said, in his condolence message to Williams' nephew, Lawrence Lovell and family.

“Over the years, together with other fellow Nobel Peace Laureates, we endeavored to promote peaceful means to the resolution of problems, through dialogue and diplomacy," the Nobel peace laureate said.

"Betty was resolute and forthright in pursuit of peaceful solutions, no matter how intractable the problems might have appeared," the Tibetan leader further said.

"I have warm memories of our meetings on many occasions and a deep appreciation of her commitment to building a peaceful community of peoples and nations,” His Holiness added.

He concluded his letter with the suggestion that "perhaps the best way to pay tribute to her would be to create peace in ourselves, with the result that our families and the communities in which we live are happy and at peace."

Williams, who formed the Community of Peace People, usually called the Peace Movement, in 1976 along with Mairead Corrigan Maguire and Ciaran McKeown, died on St Patricks’ Day, media reported.

In a statement on the Peace Movement website, Williams was described as one of the "great founder members" of the organisation. Born in Belfast, she was the daughter of a Protestant father and Catholic mother — rare for that time in Northern Ireland. After attending St Dominic's Grammar School for Girls she took up a job of office receptionist. But her life changed one afternoon when she witnessed a horrific incident in west Belfast.

Williamss' career as an international peace activist and humanitarian continued, and in the fullness of time, the Belfast woman began rubbing shoulders with the great peace luminaries of the world — Nelson Mandela, Archbishop Desmond Tutu, Mother Teresa, His Holiness the Dalai Lama.