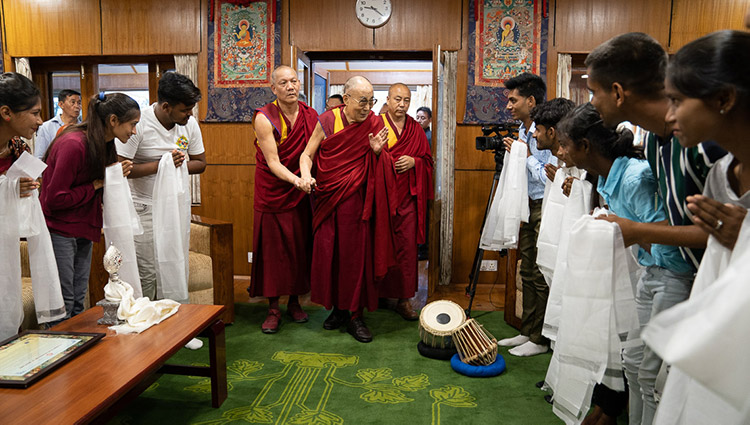 His Holiness the Dalai Lama's meeting with community representatives, staff and students of Tong-Len at his residence in Dharamshala, HP, India on July 7, 2019. Photo by Tenzin Choejor

The remarks came during a meeting with the Community Representatives, Staff and Students of Tong-Len, a small charity working with displaced Indian communities in the area around Dharamshala, Himachal State of India, July 7, 2019.

Tong-Len claims it aims to help these homeless communities gain access to basic human rights and to break the cycle of deprivation through education. To this end, the charity has established its own school and provides hostel accommodation for those children in most need.

His Holiness greeted the two dozen visitors as he entered the room. He told them that as far he could remember Tong-Len was the initiative of Ven Jamyang, a Tibetan monk, who was visiting Dharamsala to attend teachings and meditate.

The Nobel Peace Prize Laureate noticed that children from the slums begged and picked over rubbish, but received no education—he decided something should be done. “We human beings have a special brain,” His Holiness explained, “and we need to be educated if it is to develop properly. However, sometimes education is motivated by selfishness, anger, and fear. That just creates trouble. It’s clear that just educating the brain by itself does not necessarily bring peace of mind," His Holiness said.

“Yesterday, I was given a large birthday cake and I’d like to share it with you today. “I see that (apart from one Australian supporter) you’re all Indian. I often reflect that among the three great ancient civilizations of Egypt, China, and the Indus Valley, it was the Indus Valley culture that developed a thoroughgoing understanding of the workings of the mind and emotions. The practice of non-violence and compassion, ‘ahimsa’ and ‘Karuna’, came about as a consequence. Buddha Shakyamuni was a product of this movement and gave rise to significant philosophical developments.

“Nevertheless, I never say that Buddhism is the best spiritual or philosophical tradition, for just as we can’t say that this or that medicine is the best in all cases—it depends on what the patient needs—so among our different spiritual and philosophical traditions, what suits one person’s mental disposition may not suit another’s. It depends on what they find helpful. However, what is true is that the great Buddhist masters like Nagarjuna, Arya Asanga, Dignaga, Dharmakirti, Buddhapalita, and Chandrakirti were all Indian—so perhaps there is something special about the Indian brain.

“My friend, the nuclear physicist, Raja Ramana, pointed out that quantum physics is relatively new in the West, but that many of its ideas were anticipated in India 2000 years ago. Keys to this are the Two Truths, conventional and ultimate truth and the idea that appearances don’t accord with reality. You young Indians have much to be proud of.”

His Holiness explained that while modern India tends to follow a Westernised, materialistic path, ancient India had a deep understanding of the workings of the mind and emotions, and a clear view of reality derived from logic and reasoning. Following the Buddha’s admonition not to accept what he said at face value, but to investigate it as thoroughly as a goldsmith tests gold, Nagarjuna, Dignaga and Dharmakirti scrutinized his teachings. Their approach was scientific.

His Holiness alluded to discussions he’s held with modern scientists over the last 40 years or so. He mentioned that he has also heard that professors in Chinese universities have been impressed by the contents of books prepared in Dharamsala dealing with science and philosophy in the Buddhist classics. He remarked that education bequeathed to India by the British looked to God, if anywhere, for moral guidance, but lacked any idea of how to achieve peace of mind.

Ancient India was well-versed in the practices for developing a calmly abiding mind and insight into reality, ‘shamatha’ and ‘vipassana’, but these traditions are, by and large, neglected in modern India. This is why His Holiness is committed to reviving them if he can and encouraging Indians to combine ancient and modern skills on the basis of a secular approach. They can be relevant to everyone—peace of mind is a matter for the whole of humanity.

“India has great potential to bring about a more peaceful world. Mahatma Gandhi was not a great philosopher, but he showed how practical non-violence, ‘ahimsa’, could be. I’m convinced that a combination of ‘ahimsa’ and the insights of quantum physics can contribute to a more peaceful world. This is a great opportunity, please think about it.

“As you probably know, ‘tong-len’ refers literally to giving and taking—to imagining exchanging whatever positive qualities you may have for the pain and suffering of others. I find it very helpful.

“In 2008, news reached us here of demonstrations taking place in Lhasa. I was apprehensive that the violent retribution unleashed in 1959 would be repeated but felt helpless. There was nothing I could do. I practiced ‘tong-len’. I imagined taking the Chinese officials’ anger and urge for retaliation away from them and giving them patience and compassion in return. The exercise had no practical effect on the ground, but it strengthened my peace of mind.

“Similarly, on another occasion, I fell ill in Bodhgaya and drove to Patna for treatment. On the outskirts of the city, I saw a sick, old man, lying friendless and unattended on a simple bed. Again, I was unable to help directly, but later, in pain in my room, I visualized taking on his distress and loneliness and giving him solace, which helped me a lot.”

“Since I was born in Tibet, I’m physically Tibetan,” His Holiness responded, “but every particle of my brain is filled with Indian thought, so mentally I’m really Indian. I try to promote non-violence and compassion, which I’m convinced is relevant in today’s world. Maintaining peace of mind means that you’ll be calm and undisturbed. It’s on this basis that I’m committed to reviving the knowledge of ancient India—and you can help me do this.

“I’m now 84 and I might live until I’m 94 or even to 100. But I’m old, while you are young. Introduce these ideas I’ve been talking about to the next generation and the generations after that, so that you who belong to the 21st century pass something on to the 22nd and 23rd centuries. It’s more than 2000 years since the Buddha lived in India but his teachings still survive. We Tibetans have kept the Nalanda tradition alive. It’s through study and practice that the Buddha’s thoughts are preserved.

“If the world were more compassionate, it could also become demilitarized. It depends on individuals developing inner disarmament, which gives rise to compassion, warm-heartedness, and external disarmament. This is true ‘ahimsa’. Thank you”.

A representative senior student then read out a citation to His Holiness before presenting him with a framed copy. “Your Holiness, we are senior student and staff of Tong-len and representatives from the slum communities. We are here to express our gratitude for your philosophy and support and, on the occasion of your birthday, to wish you a long life.

“We were born in the slums. We had no basic resources, no rights, no respect. We had little or no food. Some of us were close to death. Some of our friends passed away due to simple disease, lack of medical care and exposure to the elements. Our friends and families are still living with these difficulties.

“Your philosophy of kindness and compassion inspired a monk to create Tong-len. Supported by you and the Dalai Lama Trust, Tong-len rescued us. We have been given health care, food, shelter, and education. Because of your support 333 children are transforming their lives.

“We used to beg and pick through rubbish but through the support of you and Tong-len, we have reached amazing feats such as completing tertiary degrees. We are grateful to you for your kindness, compassion, inspiration, and vision. We are grateful to Tong-len for seeing our needs and giving us hope and a future. We are an example of change.

“Your Holiness, your vision of secular ethics has transformed our way of thinking and inspired us to be good human beings. Study through secular ethics has helped us to learn about our common humanity and how important respect for all is. The Tong-len family is a diverse group and all people within our community are equally respected no matter of religion, caste, and gender. This concept has empowered us. We have self-acceptance, emotional maturity, tolerance and the courage to hold our heads up. The children of Tong-len have a positive future and would like to say a heartfelt thank you.

“Your vision of a global community is a gift to our generation and we feel a responsibility to spread the concepts and philosophy to the whole community. Under the support of the Dalai Lama Trust, we work in the community to develop an ethical society through education and awareness. Through our kindness-projects, we hope to make Dharamsala a kind city. We are also working in the slums to help with hygiene, education, and shelter. The children of Tong-len are committed to live through your vision to take on universal responsibilities and reduce social issues.

“On the occasion of your birthday, on behalf of the slum communities in Kangra Valley, Tong-len children and staff, we wish to present to you this memento to express our gratitude for your inspiration and your undying commitment to making the world a better and harmonious place. For the support, Your Holiness has given us to break the cycle of poverty and giving us hope and a future. We wish Your Holiness a long life to reduce poverty in the world and to create health and happiness for all humanity and that your vision of world harmony and compassion becomes a reality.”