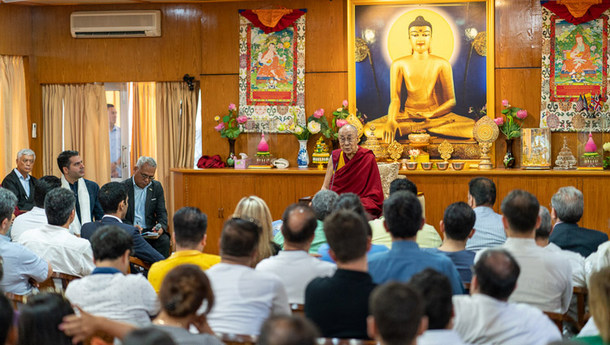 His Holiness the Dalai Lama addressing members of a group from Iran during their meeting at his residence in Dharamsala, HP, India on June 7, 2019. Photo by Tenzin Choejor

Dharamshala, India — A group of 58 members of Iranian CEOs of small and medium sized enterprises who describe themselves as messengers of peace, met with His Holiness the Dalai Lama at his residence in Dharamshala this month to discuss about world peace, religious harmony and compassion. As His Holiness entered the room they greeted him with friendly applause.

“I’m very happy to meet people from Iran,” he told them. “Some people are suspicious of Iranians, but I recall that there are reports of links between Tibet and Persia during the time of King Songtsen Gampo during the 7th century. And whereas Persians were described as rich, the Mongolians were referred to as war-like," said the spiritual leader of Tibet.

“I have certain commitments. As just one among 7 billion human beings, who all want to live a happy life, I’m committed to helping people understand that this can be achieved if they cultivate a calm, happy mind based on love and compassion. Simply put, if you can be compassionate and warm-hearted, you’ll be happy," the Nobel Peace Prize Laureate said.

“Secondly, as a Buddhist monk I feel a moral responsibility to promote inter-religious harmony. On a philosophical level there are all sorts of differences between religious traditions, but the common message of them all is the importance of cultivating love," the Buddhist leader added.

"I’m convinced that religious harmony is possible—look at India where so many religious traditions have lived side by side for thousands of years. Because I value religious harmony I’m happy to meet members of other faiths, so it’s a real honour for me to meet you Shia brothers and sisters today," the spiritual leader told them.

“These days to see people fighting and killing each other in the name of religion, whether in Egypt, Burma or Afghanistan, is really unthinkable. Next week in Delhi I’ll be attending a meeting to celebrate diversity among Indian Muslims," he said.

I’ve heard no reports of friction between Sunnis and Shias in India, so I’ve encouraged my friends in Ladakh to take more active steps to reconcile differences between their brothers and sisters of different denominations," he added.

“When I meet people of different spiritual traditions, I remember that at a fundamental level we’re all the same as human beings. In the part of Tibet where I was born, we had Muslim neighbours and as children we played together joyfully with no differences between us. Once I reached Lhasa, our capital city, with the name Dalai Lama, I found there was a small Muslim community there too," he said.

His Holiness said that "they’d been there since the time of the 5th Dalai Lama who gave them land on which to build a mosque. There were almost no reports of disputes between local Buddhists and these Muslims, who were peaceable, cooked delicious food and spoke with an impeccable Central Tibetan dialect."

“I’m looking forward to the coming meeting and hope that representatives of the embassies of various Muslim countries will also attend," he said, adding: "I believe it will be an opportunity to promote religious harmony.”

Among the questions put to him, His Holiness was asked if Buddhists don’t believe in God, how do they account for creation? He replied that 'like Jains, Buddhists believe in life after life with no beginning. Whether you have a happy or difficult life depends on how you’ve conducted yourself before.'

The Tibetan leader continued, 'being kind and compassionate to others and avoiding doing them harm are good causes for a happy life in the future. The important thing is to make life meaningful—His Holiness mentioned that he appreciates how thinking of your fellow beings as children of a merciful God can help you do that.'

Asked his response to the harassment of Muslims in Burma His Holiness explained that when he first heard about it he was in Washington DC. He expressed his sadness at what was happening and appealed to the Burmese Buddhists not only to remember the Buddha, but also to reflect that if he was there, he would have protected these Muslims.

His Holiness also explained that he had also expressed his dismay to Aung San Suu Kyi, current the State Counsellor of Myanmar or the head of government of Myanmar, who replied that the situation was very difficult and there wasn’t much she could do.

As a mark of his sympathy and concern for the well-being of these displaced people, he directed the Gaden Phodrang Foundation of the Dalai Lama to make a donation towards their relief and rehabilitation through the United Nations High Commissioner for Refugees. The Iranians showed their appreciation with another burst of applause.

Before the occasion came to an end, the visitors gathered around His Holiness in smaller groups to have their photographs taken together—clearly very happy to have met him, according to the office of His Holiness the 14th Dalai Lama.

His Holiness, the 14th Dalai Lama is the spiritual leader of Tibet and its people and their greatest advocate for a free Tibet. Over past six decades hee traveled all over the world spreading his message of peace, non-violence, and compassionate responsibility for his fellow man.