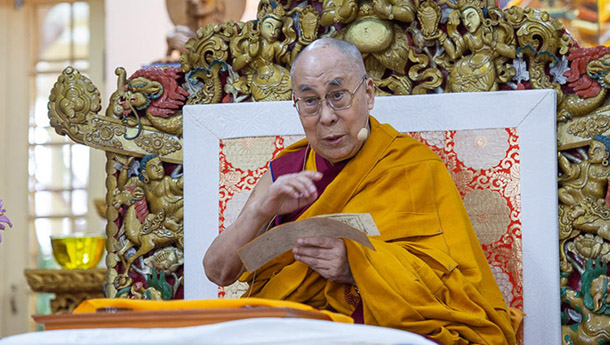 His Holiness the Dalai Lama explaining Tsongkhapa's "Three Principal Aspects of the Path" on the second day of his teachings at the Main Tibetan Temple in Dharamsala, HP, India on May 11, 2019. Photo by Lobsang Tsering

Dharamshala, India — “The primary focus of ‘Three Principal Aspects of the Path’ is the view of emptiness," His Holiness the Dalai Lama told a crowd of thousands gathered at the main Tibetan Temple in Dharamshala, India, to hear his teachings on the importance of compassion, wholeheartedness and the ability to overcome afflictive emotions as the source of many of our troubles.

His Holiness the Dalai Lama Saturday continued his three day teachings on The Furthest Everlasting Continuum and Tsongkapa's "Three Principal Aspects of the Path" at the request of Russian Buddhists at the Main Tibetan Temple in Dharamsala, HP, India.

“All sentient beings want happiness,” the Nobel peace prize lureate observed, “and seek to avoid suffering and adversity. You can see this easily if you block an insect’s path—it shies away and seeks another route. Spiritual practitioners in ancient India identified afflictive emotions as the source of many of our troubles. The Sanskrit term is ‘klesha’ rendered in Tibetan as ‘nyön-mong’, which refers to states of mind that disturb our peace of mind, making us unhappy, the moment they arise.

“Non-Buddhist practitioners in ancient India saw the afflictive emotions of the desire realm as faulty and disadvantageous. They practised all kinds of austerity to overcome them such as fasting and remaining naked. They turned away from the realm of desire and cultivated the four meditative absorptions, leading to the pursuit of the four absorptions of the formless realm—infinite space, infinite consciousness, nothingness and the peak of cyclic existence, the subtlest state of mind within the cycle of existence.

“I have several times hoped to have the opportunity to talk to such practitioners when they descend from their mountain solitudes to the Kumbha Melas. Living in such cold conditions they have clearly accomplished the practice of ‘inner heat’, which we know about from the Six Dharmas of Naropa. I would like to learn from their experiences, but the occasion has not arisen.

“The primary focus of ‘Three Principal Aspects of the Path’ is the view of emptiness. To develop that we need a method to overcome our cognitive obstructions, and that method is the awakening mind of bodhichitta. At the same time we have to understand how afflictive emotions cause us trouble and that obstructions to knowledge can be eliminated.

"Once we see that afflictive emotions can be overcome, we can appreciate that obscurations to knowledge can also be surmounted and that realization of emptiness is possible. The practice of bodhichitta—the altruistic aspiration to enlightenment for the sake of all sentient beings---supports the realization of emptiness. The determination to be free is preliminary to that.”

His Holiness mentioned that he had received explanatory transmission of this text from each of his main teachers, Tagdag Rinpoché, Yongzin Ling Rinpoché and Yongzin Trijang Rinpoché. He remarked that in his own practice he recites and reflects on the ‘Three Principal Aspects of the Path’ rather than the longer ‘Song of Experience’. When he reflects daily on the entire path he uses the ‘Foundation of All Excellence’ and for his bodhichitta practice he recites the ‘Eight Verses for Training the Mind’. He repeated that as a basis of his reflections on the view of emptiness he uses the ‘Three Principal Aspects of the Path’.

Reading through the text he noted the title, the homage to the teachers, and the pledge to compose (V.1). Tsongkhapa urges listeners and readers to pay close attention (V.2). Since there is no way to still attraction to the pleasures of cyclic existence without a pure determination to be free, he asks how it is to be achieved (V.3). His Holiness indicated the need to understand pervasive suffering, to do which there is a need to appreciate the suffering of change and the suffering of suffering.

A human life with leisure and opportunity such as this is hard to find, consequently we must avert attachment to the attractions of this and future lives. (V.5) The next verse touches on the measure of having developed a determination to be free and the verse after that shows that this is not enough and that Bodhisattvas generate the excellent mind of enlightenment. We need bodhichitta to reach Buddhahood (V.6). The process of developing the awakening mind of bodhichitta is described in the following two verses.

Swept by the current of the four powerful rivers, completely enveloped by the darkness of ignorance, and ceaselessly tormented by the three miseries—all beings, your mothers, are in this condition. Think of them and generate the awakening mind (V.7&8).

“Although you practise the determination to be free and mind of enlightenment, without wisdom, the realization of emptiness, you cannot cut the root of cyclic existence. Therefore, strive to understand dependent arising. It’s interesting that Tsongkhapa doesn’t mention ‘selflessness’ here, despite its being common to all four Buddhist schools of thought. Instead he presents that system of Nagarjuna, who praised the Buddha for teaching dependent arising, which Nagarjuna and his disciples were fulsome in exploring.

His Holiness said "this is not to say that the mind realizing emptiness and the mind understanding dependent arising are synonymous—they complement each other. When I look at you,” His Holiness remarked, “something appears to me. I see your bodies; I may hear your speech. You appear as something solid existing from your own side.

“Chandrakirti observed that things don’t exist independently from their own side, but they do exist on a conventional level. He cites the analogy of a chariot that cannot be found when analysed in seven ways, but that still exists by way of worldly convention. When you understand dependent arising you gain an insight into emptiness. You can also understand that whatever is empty is a dependent arising,"he said, adding: "the two complement each other."

“The final verse concludes, when you realize the keys of these three principal aspects of the path, depend on solitude and strong effort and quickly reach the final goal (V.14). The colophon states ‘This advice was given by the Bhikshu with extensive learning, Lobsang Drakpa, to Tsako Wönpo Ngawang Drakpa’," he further added.

Having completed the teaching, His Holiness stopped for the day. He announced that tomorrow he will conduct a ceremony for generating the awakening mind of bodhichitta. He greeted friends and well-wishers who lined the corridor as he left the temple and again had a few words for people gathered at the bottom of the temple stairs before climbing into a car and returning to his residence.