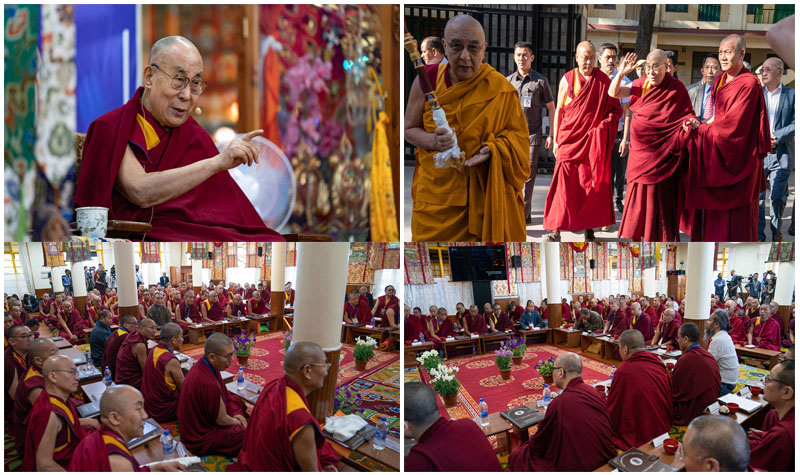 His Holiness the Dalai Lama at the First Conference on Kalachakra at the main Temple in Dharamshala, HP, India on May 5, 2019. Photo by Tenzin Choejor

Dharamshala, India — The spiritual leader of Tibet, His Holiness the Dalai Lama has opened the First Conference on Kalachakra at the main Tibetan temple in Dharamsala, HP, India on May 5, 2019.

The Secretary of Namgyal Monastery welcomed His Holiness and all participants to the start of the First Conference on Kalachakra for Scholars of all Tibetan Traditions. Monks of the Monastery sitting in orderly rows chanted verses in praise of the Buddha followed by the Praise to the 17 Masters of Nalanda.

“How many scholars have come from elsewhere?” His Holiness wanted to know. The answer was twenty. “I’ve been quite unwell,” he said. “I came back from Delhi on 8th April feeling fit, but on 9th I was out of sorts, so I returned to Delhi for treatment. It turned out that my illness was not so bad, but I found the treatment tiresome. Now I’m well again, but I need to rest and relax. My staff keep telling me I need to reduce my schedule, so generally I’ll only meet people every other day.”

The Abbot of Namgyal Monastery, Thomtog Rinpoché, who is also Chairman of the Namgyal Monastery Education Society, introduced the occasion. He welcomed His Holiness and Samdhong Rinpoché to this First Conference on Kalachakra. He clarified that the name Shri Kalachakra refers to the union of bliss and emptiness arisen in the form of a deity. Shakyamuni Buddha first taught about this in the form of Kalachakra. The teaching was then taken to Shambhala.

“Scholars from all Tibetan Buddhist traditions, Nyingma, Sakya, Kagyu, Geluk, Jonang and Butön have written extensively about Kalachakra,” he explained. “The tradition is alive. Jé Tsongkhapa regarded the Kalachakra as an authentic tradition and practised the Six Yogas. Jamyang Chöjé, founder of Drepung Monastery, records that Jé Rinpoché had a vision of Kalachakra. Later, the 7th Dalai Lama, Gyalwa Kalsang Gyatso, composed an extensive sadhana and instigated its practice in Namgyal Monastery. His Holiness the Dalai Lama has given the Kalachakra Empowerment to hundreds of thousands of people around the world. Consequently the complete practice remains intact.

“As followers of Jé Rinpoché it is our responsibility to practise the teachings of the Buddha as he and his followers have done. We regard this conference as an offering of practice. I too pray that His Holiness may live long, that his propitious wishes may be fulfilled and that the Tibetan people may once again be reunited. May all attain the state of Kalachakra.”

The Principal of the Namgyal Monastery School then outlined the procedure whereby representatives of various traditions, Nyingma, Sakya and Geluk, the Bokar Kagyus, Jonangpas, and a Geshé from Zhalu Monastery, as well as a representative of the Astro Department of the MenTseeKhang will make their presentations over three days.

His Holiness began his speech by teaching how to transform the mind on the basis that a disciplined or calm mind is happy whereas an unruly mind is not. “I regularly say how important it is for us to be 21st century Buddhists. In the past in Tibet, people of all three provinces were Buddhist. Even the Bönpos studied Buddhist texts. Buddhism spread right across the land and people placed great faith in rituals and prayers. But what are the true characteristics of the Buddha’s teachings? In India there were the practices of concentration and insight or analysis (shamatha and vipashyana), in addition to which the Buddha taught about causality and dependent arising."

“Explanation of the Four Noble Truths with their 16 characteristics and the 37 factors of enlightenment is common to the Foundational and Great Vehicles. They were laid out in the first round of teachings and explained more elaborately in the second.Yesterday, I met with some Indian scholars who asked in the course of our conversation why it is that although the harmful effects of smoking are well-established, some people persist in doing it. I suggested that it is because we have different levels of understanding."

"To start with you may hear or read about something, but you’ll only really begin to understand it if you think about it. Reflection generates a deeper understanding, but only by focussing on what you’ve understood will you reach conviction. At that point you’ll be able to explain to others what you’ve understood on the basis of your own experience. This is why in terms of Buddhist practice we stress the importance of study, critical reflection, and meditative practice.

“We take refuge in the Buddha, Dharma and Sangha without really knowing what the Buddha is. We need to think about how enlightenment is gained on the basis of the Two Truths, on overcoming the misconception of true existence. All religious traditions teach about love and compassion from different point of view, but the Buddha taught us to use reason and to think about dependent arising. This is how to uproot the causes of suffering. He taught that the more you exercise reason, the more you’ll understand and the deeper your conviction will be. This is what Nagarjuna did and consequently what he wrote attracts the admiration of scientists today.”

His Holiness noted that there is a practice of maintaining a pure vision of the Lama, but Jé Rinpoché stated that if the Lama teaches something that is at variance with the classical texts, you should challenge it. According to the Nalanda Tradition even the words of the Buddha are subject to analysis. For example, when we come across the Buddha’s advice that the five psycho-physical aggregates are like a load borne by the self, we have to ask why he taught that. The Buddha himself counselled, "As the wise test gold by burning, cutting and rubbing it, so, Bhikshus, should you accept my words—only after testing them and not merely out of respect."

“When I give someone a statue of the Buddha I describe him as a thinker and scientist of ancient India, someone whose teaching can be understood through reason, investigation and experiment—and by setting it against our own experience. Here in exile I encouraged nuns to study and to seek the highest qualification, which prompted some surprise among older monks in the monasteries in the South. However, I reminded them that the Buddha offered full ordination equally to monks and nuns, so why should they not also study to the same level? Consequently we now have Geshé-mas and even lay people are showing an interest in study.

“As far as the Kalachakra is concerned, one question that has to be asked,” and His Holiness laughed, “is where is Shambhala? It seems it may not be in this world, but we have to read the texts carefully. I have to admit I sometimes find what is written in the Jataka Tales hard to believe. Maybe some of them exaggerate. However, I don’t have such doubts about what we find in the Heart Sutra—‘Form is empty, but emptiness is form. Emptiness is not other than forms and forms are not other than emptiness.’

“Quantum physicists talk about the observer effect—that the mere observation of a phenomenon inevitably changes that phenomenon. The Mind Only School states that phenomena are the creation of consciousness. The Middle Way School declare that just because something is not found under analysis that doesn’t mean it does not exist; it can still exist in conventional terms. Disturbing emotions arise from our exaggerated outlook, our distorted view of reality that conceives of true existence.

“If we can explain the Buddha’s teachings in terms of the ground reality and the path that culminates in the resultant state they will survive for centuries.” As far as the Kalachakra tradition is concerned, His Holiness stated that the monks of Jonang Monastery and the followers of Butön Rinpoché were the main upholders of the tradition. In Tibet, Panchen Palden Yeshé was said to have visited Shambhala and brought a huge grain back to Tashi Lhunpo. There were Indian masters who did not accept the Kalachakra tradition and it seems Rendawa did not either. His Holiness emphasised that it’s necessary to study and put what you understand into practice and see whether you have a genuine experience.

With regard to the Six Branch Practice of Kalachakra, the Jonangpas still maintain the practices for day and night and gain the signs in relation to them. His Holiness mentioned a special practice for fixing the gaze on the mid-brow that Kalu Rinpoché showed him. He alluded to the practice of bliss and empty-form in relation to Kalachakra, as well as the four empty states of which the fourth is the empty state of clear light. He recalled that where the Buddha’s second round of teachings explains in detail about cessation, in the third round he spoke of the mind of clear light.

Finally, His Holiness remarked that whereas some people claim that building temples and monasteries amounts to building the Dharma, Vasubandhu was straightforward in stating that the survival of the Buddha’s teaching depends on study and practice. “It’s one thing to study the scriptural teaching, but it has to be augmented by realization within yourself. That’s the only way to ensure the teaching will survive—keep up what you’re doing and explain this to others,” His Holiness added before he was escorted from the temple by the Abbot and Disciplinarian of Namgyal Monastery. At the bottom of the temple steps he climbed into a car and drove back to his residence.