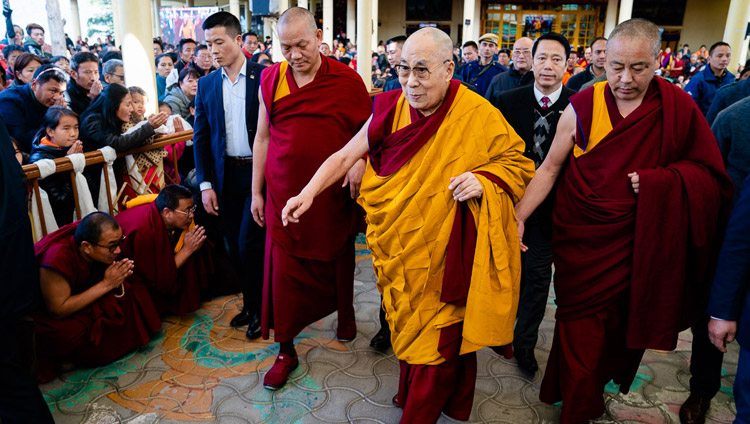 His Holiness walking back to his residence at the conclusion of the final session of his teachings at the Main Tibetan Temple in Dharamshala, HP, India on February 23, 2019. Photo: Tenzin Choejor

Dharamsala, India — His Holiness the Dalai Lama has conferred the Manjushri permission after conducting the preparatory rituals in the morning in Dharamshala, India on February 23, 2019.

The Saturday morning, the weather cleared up -the sky was blue and the sun shone brightly over the snow-clad mountains as His Holiness the Dalai Lama walked from his residence to the main Tibetan temple in Dharamshala, India, for the final session of the series of his teachings. The crowd in the temple yard and surrounding welcomed him with warm smiles and folded their hands.

“This Manjushri practice belongs to action tantra and the lower tantras are preliminary to the Highest Yoga Tantra that exemplifies what is special and profound about tantra. The Perfection of Wisdom teachings make clear that everything from physical forms up to the omniscient mind is empty of inherent existence. Nagarjuna elucidates this in his ‘Fundamental Wisdom of the Middle Way’. However, in terms of the mind that apprhends it, a distinction is drawn between the adventitious, gross state of mind and the innate mind of clear light.

“The substantial condition for the wisdom-truth body of a Buddha is the innate mind of clear light. The gross state of mind cannot be the substantial cause. The luminous, innate mind of clear light is the mind that meditates on emptiness. This recalls the first lines of the verse the Buddha pronounced soon after his enlightenment: ‘Profound and peaceful, free from elaboration, uncompounded clear light, I have found a nectar-like Dharma.’

“Jamyang Shayba in his work on philosophical systems states that although emptiness is taught in the sutra vehicle, the subtlest mind that meditates on that emptiness is not taught there. Although the obscurations to knowledge are revealed in the sutra presentation, it is in tantra that the supreme method for eliminating them is found.”

His Holiness mentioned that the permission of Manjushri he was about to give was one of several forms of Manjushri included in the Rinjung Gyatsa collection. He received it from Tagdrag Rinpoché when he was a child. He commended the practice especially for enabling the individual to cultivate and increase his or her great, vast, profound and swift wisdom.

He remarke the practice facilitates the sharpening of intelligence and the ability to engage in critical analysis. It also enhances the wisdom on the basis of which to develop bodhichitta that leads to the state of omniscience. His Holiness added that we rely on profound wisdom when we make decisions and on vast wisdom when we seek to take a wider perspective on something.

The Buddhist leader noted that although the 16 Arhats are regarded with great respect, there is no record of any teaching they have given. The legacy of the teachings in fact depends on the works of Nagarjuna and his followers, Asanga and those who followed him, as well as Dignaga and Dharmakirti and those who came after them.

“We’ve completed the teaching of Bhavaviveka’s ‘Essence of the Middle Way’ based on Khenpo Kunga Wangchuk’s annotations. Another way in which we may consider Bhavaviveka kind is that his criticism of Buddhapalita’s assertions prompted Chandrakiriti to address them in his ‘Clear Words’ thereby clarifying the correct view. These books by Indian masters are really helpful for dispelling doubts about the misconception of intrinsic existence.

“It’s a good, clear day today. We’ve finished the teaching and I look forward to seeing you all again. I’ve received an invitation from the Abbots of Drepung and Ganden Monasteries to come to South India and if I’m feeling fit, I’d like to come. Whatever merit we have created, may it contribute to the flourishing of the Buddha Dharma and the tradition of Je Tsongkhapa in particular.”

According to His Holiness, this permission or blessing of Manjushri is related to Tantra. Nalanda masters like Nagarjuna, Aryadeva and Chandrakirti wrote extensively about Guhyasamaja Tantra. Shantarakshita, who later established the Buddha’s teachings, monastic ordination and the Three Trainings in Tibet, also wrote about Highest Yoga Tantra. Subsequently, Atisha too mentioned the practice of tantra in his work ‘Lamp for the Path to Enlightenment.