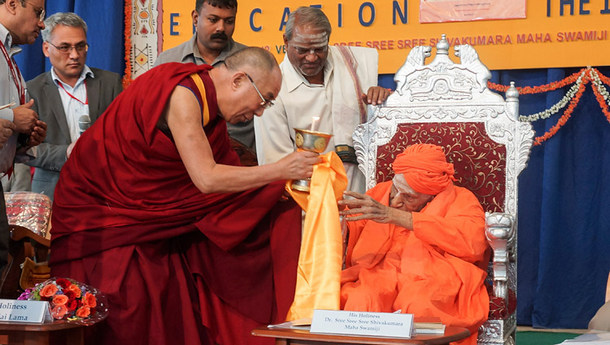 His Holiness offering a butter lamp to Sree Shivakumara Swamiji in Karnataka, India on November 27, 2012. Photo by Jeremy Russell

Dharamshala, India — The spiritual leader of Tibet, His Holiness the Dalai Lama Tuesday expressed grief over the demise of the pontiff of Sree Siddaganga Matha, Shivakumara Swami, who passed away at the age of 111 after a prolonged illness.

“I had the privilege of meeting Swamiji at Tumkur University several years ago,” His Holiness wrote. “I admired his dedicated service for the benefit of the poor, especially the many educational institutions Swamiji set up for them.”

His Holiness noted that Swamiji’s long and meaningful life was an inspiration to others. He concluded by paying his respects once again to Swamiji and his many followers for their service to humanity.

His Holiness the Dalai Lama offered a butter lamp to Swamiji during his visit to Tumkur University in Tumkar, Karnataka, India on November 27, 2012.

The 111-year-old Lingayat pontiff was being treated for a lung infection which he developed after an operation on December 8 following a treatment carried out for liver and bile duct infection.

Shivakumara Swami is considered to be one of the most esteemed religious and social practitioners of the Lingayat-Veerashaiva faith of Lingayatism.

Prime Minister Narendra Modi also took to the micro-blogging site and tweeted, "His Holiness Dr. Sree Sree Sree Sivakumara Swamigalu lived for the people, especially the poor and vulnerable. He devoted himself towards alleviating ills like poverty, hunger and social injustice. Prayers and solidarity with his countless devotees spread all across the world."

The Karnataka state government has declared three-day state mourning. All schools, colleges and government offices will also remain closed for a day owing to Swami's demise.