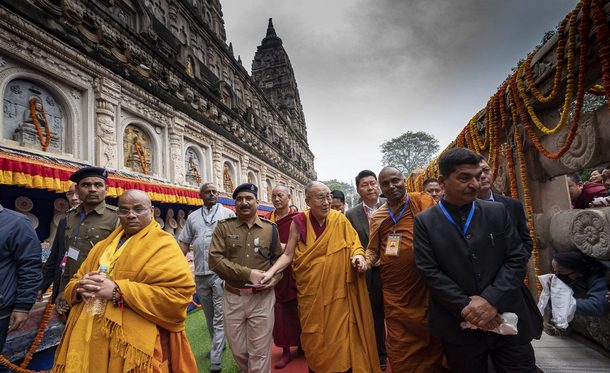 His Holiness, nearing the end of his pilgrimage, makes his way around the Mahabodhi Temple in Bodhgaya, Bihar, India on December 17, 2018. Photo by Tenzin Choejor

Bodhgaya — His Holiness the Dalai Lama, left his residence at Gaden Phelgyeling Monastry and made his way towards the Mahabodhi Temple in Bihar, India on 17th December 2018. Making his way through the crowd, he offered his respects by lighting a lamp in front of the Buddha Statue inside the Mahabodhi Temple and prayed for world peace.

Thousands of Pilgrims waited in line to catch a glimpse of His Holiness and receive blessings of the Tibetan spiritual leader.

Bodh Gaya is one of the four holy sites in Buddhism and is revered particularly as the place of attainment of enlightenment by Lord Buddha more than 2500 years ago.

Inside the temple, His Holiness was joined by prominent monks and priests of Namgyal Monastry and the chief priest of the Bodh Gaya Temple Management Company in reciting the prayers of Buddha and spreading his teachings.

Meanwhile, unprecedented numbers of security personnel were deployed i.e. around 3000 to keep a vigilante watch over the town and would continue until the departure of His Holiness from Bodh Gaya.

During his month long stay at Bodh Gaya, His Holiness is scheduled to deliver discourses to thousands of disciples on the mornings of 28th, 29th and 30th of December in Gyalsey Thokme Sangpo’s 37 Practices of a Bodhisattva (laklen sodunma) and Dharmakirti’s Pramanavartika – Commentary on Valid Cognition (tsema namdrel). Special programs have been organised for those who want to escape the monotonous of life and find the inner self through the practice of Bodhisattva.