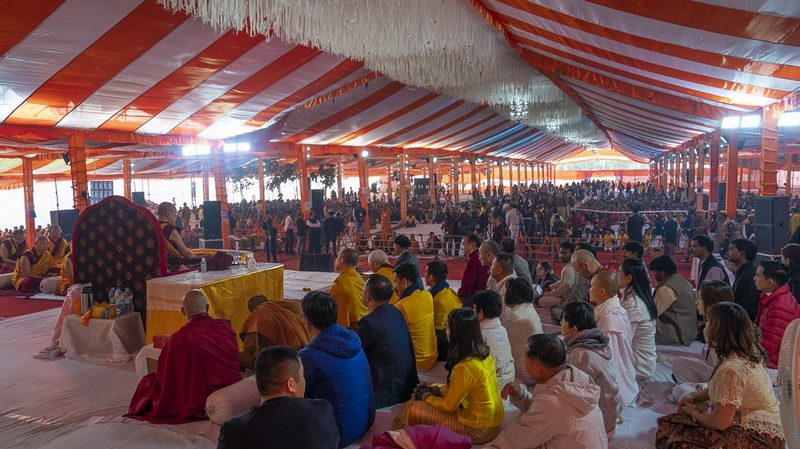 His Holiness the Dalai Lama speaking at the Youth Buddhist Society of India ground on the first day of his teaching in Sankisa, UP, India on December 3, 2018. Photo by Lobsang Tsering

Sankisa, UP, India — Speaking about the violence of the 20th century which had reportedly killed more than 200 million people, the spiritual leader of Tibet said now is the best time to "build a century of peace now, not through prayer.”

Hosted by the Youth Buddhist Society of India, His Holiness the Dalai Lama is arguing in a 3-day teaching in Sansida, UP for countering humanity’s negative emotions through ancient and secular Indian wisdom.

His Holiness began his teachings on Monday by countering the notion that negative emotions are essential to human thought and behavior. He argued that humans possess an innate compassion and, through the teachings of ancient Indian wisdom, can eliminate all negative emotion. His teachings suggested that ancient Indian wisdom’s understanding of secularism is relevant and beneficial to modern society, and argued that it should be revived in modern India.

“If you respect all communities of religion and those without, you will not indulge in violence or harming others. It’s very important for us to take an earnest lesson from these thousand year old secular principles.” He went further, arguing that despite the diverse religions and philosophies that individuals subscribe to, negative emotion is not a necessary vehicle of communication. “Without touching religion as such, we can practice love and compassion in a secular way.”

During His Holiness’ discussion about the relevance of ancient Indian wisdom to modern society, he eluded to its nonviolent teachings and referenced India’s centuries-old religious harmony as a model for the world. “With more than a billion people and for many centuries, India has practiced and preserved its religious harmony. Hence, it shows that religious harmony is possible.”

He also cited the dilemma faced internationally that deals with the rift between material development and mental and psychological peace. “The world today is facing a serious crisis of emotions. Even in the most highly developed countries, despite the material development, progress and prosperity, we see that there’s a mental and psychological disturbance in many people. Without the understanding of human emotions and training, we easily resort to weapon and force.”

“The violence of the 20th century have claimed more than 200 million people killed in the violence. Now, we should build a century of peace, not through prayer, but through our own practice.”

His Holiness proclaimed that he has faith in the younger generations of India to bring about change to humanity’s negativity and violence by practicing the teachings of ancient Indian wisdom in order to bring about a “transformation of the mind.” The practices referred to above by the Dalai Lama concern ancient Indian traditions, which include concentration, insight, shamatha, and vipassana, all of which develop a profound understanding of the workings of the mind for those who chose to practice.

He continued to discuss the ability of religious harmony to prevail in the face of philosophical conflict within the frame of the Nalanda tradition of Buddhism. “In the Nalanda tradition of Buddhism, there are four schools of thought: Sarvastivada Vaibhashika; Sarvastivada Sautrantika; Madhyamaka, the Mahayana philosophy of Nagarjuna; and Chittamatra, the Mahayana philosophy of Asanga and Vasubandhu. Among these four, there are lots of arguments and criticisms against one another but these criticism are not to create disharmony but to do more investigation into the teaching of Buddha for our spiritual and mental development.”

His Holiness’s teachings prompted his audience of more than 15,000 to develop their own practices of love and compassion towards one another regardless of religious philosophy.

In attendance were more than 15,000 people, including Professor Kalon Trisur Samdhong Rinpoche and representatives from Tibetan and non-Tibetan Buddhist monastic communities.

YBS is a volunteer, governmental, non-sectarian, non-partisan movement rooted in grass root initiatives, local involvement, and the development of mind among Indians. It was established in 1986 in Sankisa by Mr. Suresh Chandra Bauddha and is based on Engaged Buddhism. Bauddha was motivated by removing the suffering caused by the Dukkha (suffering) in order to attain happiness. YBS works to promote Buddhism and towards social problems such as education, poverty, environment, economic issues, sustainability, and drug and health-related education.