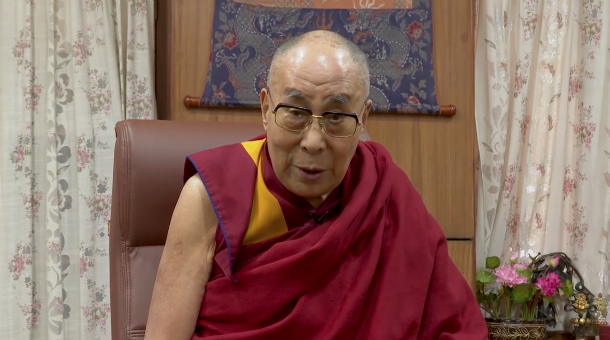 His Holiness the Dalai Lama thanks the People and Government of Himachal Pradesh in a special video message. Video courtesy/OHHDL

Simla, India — On the occasion of the mega ‘Thank you Himachal Pradesh’ event being held at the state capital, Shimla, His Holiness the Dalai Lama offered his greetings and gratitude to the State government and people. In the 7-minute video message, His Holiness expressed himself as a proud citizen of the Himachal Pradesh and student of the rich Indian tradition.

His Holiness stated that India was the world’s largest democratic nation with a rich civilisational history, which he found was, worth sharing with the world. As a student of the ancient Indian tradition, His Holiness offered his contribution in reviving the knowledge in the country and particularly in Himachal Pradesh through an academic collaboration between the Government College and Tibetan Buddhist centres. To former and present Governor, Chief Minister and Ministers, His Holiness offered his heartfelt gratitude and prayers for their success and service to the country.

"I always refer to Himachal Chief Minister and Governor as My Governor and My Chief Minister because now for nearly 59 years, I have lived here. In the summer of 1960, I reached here so I consider myself as a citizen of this state," His Holiness said during the Thank you Himachal Pradesh’ event held at the state capital, Shimla.

"In the last few decades, I really enjoyed staying in Kangra district. Nowadays, since recent, I have found as a result of visiting different places and countries and then through discussions with scientists and educationists, I realised, ‘Oh, today’s world is passing through some kind of emotional crisis’. In that situation, I think ancient Indian knowledge of how to tackle our emotions is something very relevant.

In the last few decades, I always try to make contribution, ultimately for humanity. Firstly within the country. As far as India is concerned, the only question is of revival because these are not an alien concept. The knowledge which we have kept and practice have all come from India. Therefore, I feel it is quite easy to revive this ancient Indian knowledge about our mind and emotion."

"So then here in Himachal, historically already there are some Buddhist communities in Lahaul and Spiti areas. People in these areas are now determined to study this ancient Indian knowledge. There is an organisation whose main aim is to create a learning centre for all the Buddhist monasteries in the whole northern Himalayan range. Now Himachal is not only a part of that but also, you see, there are many Tibetan refugee Buddhist centres in this state.

Then, as the Chief Minister knows, recently I discussed with the Government College’s leaders. I told them the time has come that in order to revive the ancient Indian knowledge in modern India, we should start some program; firstly some teachers training. Here in Dharamsala, we can easily arrange and that is part of our gratitude to this state."

'On behalf of several thousand Tibetans in this state, I want to thank the State government and also pray for the Governors and Chief Ministers of the last few decades. Many of them are now only in our memory. As they have shown tremendous support for us, I always remember them in my prayer.

The present Governor as well as present Chief Minister, and other concerned ministers, I would like to thank and also I pray for your success and your great service. Himachal is part of India. Broadly you are serving this great nation-the most populated democratic country on this planet and with long ancient knowledge. I think India’s civilisation, among the Chinese civilisation and Egyptian civilisation, is a very sophisticated civilisation so you should feel proud. I also feel proud as a student of this ancient knowledge."