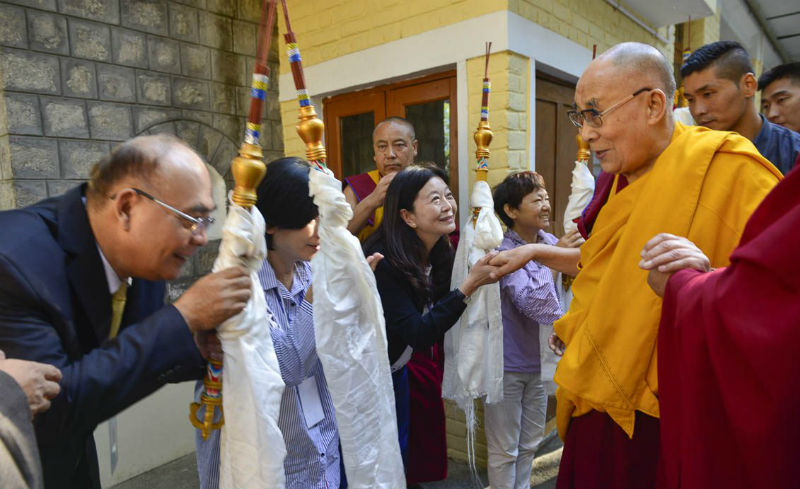 His Holiness greeting organizers on his way to the Main Tibetan Temple for the first day of his four day teaching in Dharamsala, HP, India on October 3, 2018. Photo: Ven Tenzin Jamphel

Dharamshala, India — At the request of Taiwanese devotees, His Holiness the Dalai Lama, spiritual leader of Tibet on Wednesday commenced his four-day teachings to continue last year's topic on Chandrakirti’s Entering the Middle Way (uma jukpa) at the main temple in Dharamshala, India.

His Holiness the Dalai Lama came forward to part his teachings to the public in the temple at his residence in McLeod Ganj. Inside the main Tibetan temple in Dharamshala , His Holiness waved to the crowd, greeted the Lamas seated around the throne and took his seat.

Among the 6500 people in attendance, 1000 were Taiwanese, most of them belonging to 18 cultural organizations participating in the International Association of Tibetan Buddhist Dharma, Taiwan. In addition, there were 500 Indians, 1800 people from 66 countries abroad and 3200 Tibetans.

Monks from Thailand made an auspicious beginning to the proceedings as they recited the Mangala Sutta in Pali. Taiwanese disciples then chanted the Heart Sutra in Chinese. His Holiness completed the preliminary formalities by reciting the verses of salutation to the Buddha from ‘Ornament for Clear Realization’ and Nagarjuna’s ‘Fundamental Wisdom of the Middle Way’. He welcomed everyone in the audience:

“Those of you from Taiwan have been coming for many years now and today there are people from many other places too—I greet you all. I’m going, to begin with, an introduction to the teachings of the Buddha. Many of you may be familiar with it, but there may also be some who haven’t heard it before.
“The following verse sums up the Buddha’s advice:

“Commit no unwholesome deed,
Perform only perfect virtue,
Completely tame your mind,
This is the teaching of the Buddha.

“A rich tradition of philosophy and psychology already existed in India at the time of the Buddha. A general belief in past and future lives was supported by the reports of individuals who had memories of their previous lives. Since the body doesn’t travel from one life to another, the question was what does? Many schools of thought posited a self-separate from the mind/body combination that they called atman. Taming the mind relied on training in ethics and concentration on the basis of which wisdom could be cultivated.”

His Holiness explained that when, in due course, the Buddha encountered his five former companions in the Deer Park outside Varanasi, they recognized a change in his demeanour and asked him to teach what he had realized. Consequently, he taught them the Four Noble Truths—the truth of suffering, the truth of its origin, the truth of its cessation and the truth of the path to that. In terms of what they needed to do, he explained that suffering must be known; its origin must be overcome; its cessation must be achieved and the path to it must be cultivated.

His Holiness observed that the Buddha identified 16 characteristics of the Four Noble Truths, four pertaining to each truth. The four characteristics of the truth of suffering are that it is impermanent, suffering, empty and selfless. His Holiness made clear that on one level we can understand impermanence to mean that life ends in death. At a subtler level, this means that things arise, abide, decay and end in destruction. Subtler still is the understanding that the disintegration of a phenomenon is brought about by its very cause. Thus, change to our psycho-physical aggregates, our mind/body combination, derives from their cause which is karma and mental afflictions.

“What is important to recognise” His Holiness went on, “is that suffering is rooted in ignorance. We will not overcome it until we counter the ignorance that is a distorted view of reality. We remain subject to that ignorance so long as we think of the ‘I’ as an independent self. Yet when we search for such a self as an entity independent of the mind/body combination, we find nothing. We cannot find such a self among the five psycho-physical aggregates that make up the mind/body combination, nor can it be identified with consciousness.

Fabrication ceases through (understanding) emptiness. We can gain experience of emptiness if we make a steady effort. If we read Nagarjuna and his followers’ works, we can see how they thoroughly explain that there is no independent self.

“The defilements of the mind associated with a distorted view of reality are not of the mind’s intrinsic nature because the nature of the mind is clarity and awareness. Cessation is that state of mind in which the defilements have been overcome. Therefore, liberation is attained by thoroughly purifying the mind.”

“I first heard about emptiness 70 years ago, but I’ve been thinking about it for 60 years,” His Holiness recalled. “It’s good to be curious. As a child when I saw different insects I wanted to know where they came from. I also wanted to know why there are so many kinds of flowers. For the last 50 years, I’ve also given deep thought to the awakening mind of bodhicitta. Today, I heard a report that elderly people are increasingly experiencing loneliness, which reminded me that if you cultivate compassion and bodhicittas you’ll never feel lonely.”

His Holiness concluded that in addition to the need to completely tame the mind it is also necessary to sustain the body and it had reached the time for lunch. He will continue his teachings tomorrow morning.