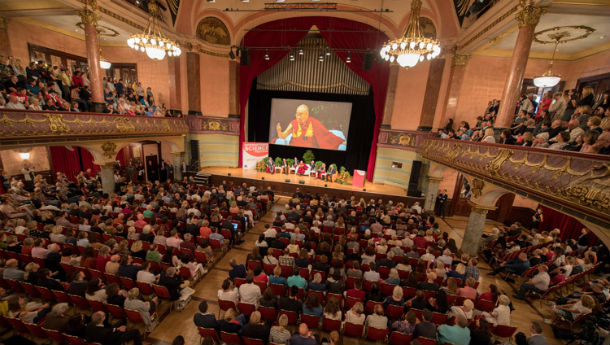 A view of the hall at Kongresshaus Stadthalle Heidelberg during His Holiness the Dalai Lama's opening remarks at the dialogue on Happiness and Responsibility in Heidelberg, Germany on September 20, 2018. Photo by Manuel Bauer

Dharamshala, India — His Holiness the Dalai Lama participated in a symposium on ‘Happiness and Responsibility’ organised by the German Archaeological Institute (Deutsches Archäologisches Institut, DAI) on the celebratory occasion of International Science Festival in Heidelberg, Germany on 20 September.

The discussion on mind and consciousness was addressed by His Holiness Dalai Lama and he deliberated that the conscience of the mind can only be retained if the sensory conscience is understood. However, the former should not be confused with the latter because the sensory conscience is only based on the perceptions of the sensory organs. Continuing on the same lines, His Holiness reiterated that emotions like anger, attachment etc. can be developed in the back of the mind, combined with its’ state, even when the brain is asleep.

He further remarked that there have been several mysterious and unexplainable cases of a phenomenon in which it has been observed that a person who has been medically proven to be dead persists to remain bodily fresh for many days. The scientists find it very obscure and have no explanation for it. However, His Holiness affirmed the existence of such a phenomenon.

His Holiness explained that it is the subtle consciousness, the sixth sense, that remains in the body after death for some days, which is why no traces or signs of decay are found on a dead body for several days.

“Late 20th century scientists now began to feel there is something, we need further investigation,” said His Holiness while describing the recent efforts made by scientists on the subject.

Astrophysicist Professor Dr Bartelmann asked His Holiness a few questions on the mind in the context of happiness to which His Holiness responded that philosophy alone can’t cover entire humanity but science being a universal source of knowledge, through its researches and findings can teach the importance of peace of mind.

His Holiness even elaborated on how scientific findings have revealed that a compassionate mind leads to a healthier body. “Once you start thinking about the well-being of others, that is when your perspective of thinking and mind broadens,” said His Holiness.

On the topic of dealing with problems, His Holiness advised that converging all the focus on the problem itself may not help to find solutions but if the same problem is approached same from a wider perspective then the problem may not seem big anymore and its intensity can be diminished.

His Holiness emphasised on the need for promoting the inner values through education which, according to him, the modern education system seems to neglect.

“Education system today focuses only on the development of smart brains as a result smart brain becomes the disposable of anger, hatred, jealousy and self-centred attitude” His Holiness commented.

Furthermore, He implored that eventually, one’s happiness depends on the happiness of their community because the human being is a social animal.

His Holiness then went on to explain that responsibility emerges from a sense of concern for others’ well-being. Therefore, he suggested that one should indulge in making at least the minimum effort in creating a happy world. A contribution must be made to reach a comprehensive understanding of not just focusing on material activity but also on social and emotional activities.

The highly enlightening event concluded with an interactive question and answer session with the audience.

One participant had asked His Holiness about how to maintain peace in a world facing wars and disasters constantly, to which His Holiness recommended to reconsider the method used to deal with the problem. According to him, instead of weapons, dialogue should be adopted.

His Holiness cautioned that praying alone won’t suffice the need for a peaceful world. Therefore, effort and actions must be implemented through education.