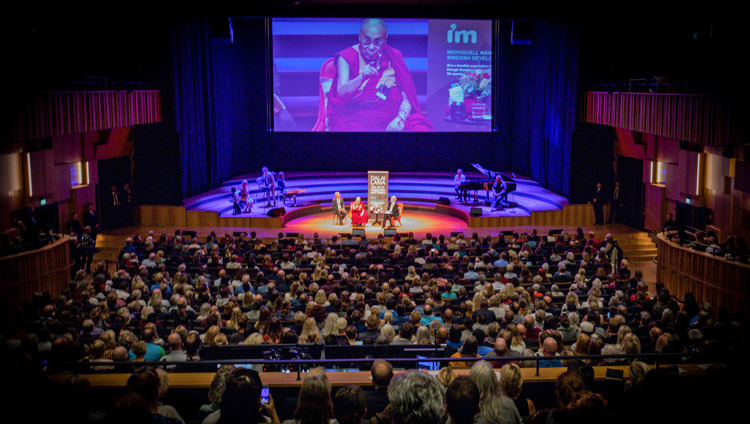 A view of the Malmö Live auditorium during His Holiness the Dalai Lama's talk in Malmö, Sweden on September 12, 2018. Photo by Erik Törner/IM

Malmö, Sweden — “The warm-heartedness of compassion dispels any sense of suspicion and instils that confidence that allows you to conduct yourself honestly and truthfully," His Holiness the Dalai Lama told the crowd while addressing at a conference called 'The Art of Happiness and Peace' in Sweden's third-largest city of Malmö on September 12, 2018.

In an auditorium known as Malmö Live the spiritual leader of Tibet was welcomed and introduced to the audience of 1200 by Kattis Ahlstrom, a Swedish journalist and television presenter. She invited him first to listen to songs performed gently by Lisa Ekdal and with great zest by Rickard Soderberg, which he enjoyed. Before beginning his talk, he asked for more light on the audience so he could see the faces of the people he was talking to.

“Brothers and sisters, we are all the same in being human. Whether we are Swedish or Tibetan is of secondary value. We are physically, mentally and emotionally the same. We all want to live a happy life and yet many of the problems we face, bullying, cheating and poverty, are made by human beings. At the same time, as social animals, we depend on the community to survive. Therefore, we have a responsibility to solve such problems and have to work to ensure the well-being of others.

“In the course of serious talks with scientists over the last nearly 40 years about cosmology, physics, neurobiology and psychology, I have seen experiments involving pre-verbal infants. They are shown animations illustrating someone helping another person and someone else obstructing another’s efforts. The infants show clear approval of the helpful behaviour and regret when they see someone being harmful or obstructive. From this it is concluded that basic human nature is compassionate.

“The warm-heartedness of compassion dispels any sense of suspicion and instils that confidence that allows you to conduct yourself honestly and truthfully. All 7 billion human beings owed their birth to their mother and then depended on her kindness to survive. In my own case my first teacher of compassion was my mother.

“I always think of myself as just another human being, not as someone special or as the 14th Dalai Lama. Whoever I meet, I greet with a smile. In my day to day practice I think of all beings as dear to me, which is why I start my talks—‘Brothers and sisters...’ To emphasize differences of nationality, race or religion between us, just leads to problems, when we are fundamentally all the same.

“I also highlight the importance of inter-religious harmony. The fighting and killing we see today in the name of religion is unthinkable. In India, despite great diversity, we see religious harmony thrives.

“We can look to our own experience. Families whose members love and trust each other are happy, even if they are not well-off. Families whose members are suspicious of each other are unhappy even if they are wealthy. I’ve noticed that young women spend time and money on cosmetics to enhance their looks, but no matter how well made up, if your face is angry no one will find it attractive.

“In our early days in exile a Tibetan monk official I knew well disrobed and married. I once teased him about his new wife’s plain looks and he told me that her face might not be special, but her inner beauty was remarkable. I was left with nothing to say, but I learned that inner beauty, warm-heartedness, is the real key to a sound marriage.”

Kattis Ahlstrom read out questions submitted by members of the audience to His Holiness. The first concerned refugees coming to Europe and he reiterated what he had said earlier to members of the media that it is good to offer help in the short term. However, in the longer term most refugees want to return to the countries they have fled. What’s important is the restoration of peace there and giving them, especially the youth, training to be able to rebuild their countries, but also being realistic about what help you can give.

“We Tibetan refugees have been 60 years in exile, but our ambition is to return and restore our country. In exile in India we have worked to educate our children and to keep our language, identity and culture alive with the hope of restoring them in our homeland when conditions allow.”

Asked how to deal with hatred in society, His Holiness noted that human beings with their sophisticated language and marvellous intelligence are the only beings who engage in war, which is systematic violence. Predators like lions and tigers only attack other creatures when they are hungry. If, as in a zoo, they are well fed they are no threat to other animals.

He remarked that one of the inadequacies of modern education is its inability to teach how to achieve peace of mind. Since physical hygiene is taught to preserve physical health, learning to tackle our negative emotions by implementing emotional hygiene would help students become mentally fit and establish inner peace. He said the education system should take responsibility for inculcating inner values and moral principles in a secular way. He added that it is his belief that India has great potential for combining modern education with ancient Indian understanding of the workings of the mind and emotions.

Answering a question about optimism His Holiness declared that if efforts to create a better, more peaceful world were begun now with the education and training of the next generation real change might be seen in about 30 years. With regard to Tibet he mentioned that he is not seeking independence although in the past it was one among three independent empires—China, Mongolia and Tibet. Tibetans could benefit from remaining with the People’s Republic of China if the Chinese authorities respected Tibetan identity, culture and language as specified in the Chinese constitution.

Birthe Müller thanked His Holiness for coming, presented him with a gift and invited him to wave to her grandchildren watching from the balcony.

His Holiness joined supporters of IM for lunch. Ann Svensén spoke again about humanium metal and the beautiful things—bracelets and such ornaments, watches, spinning tops and other toys—it is being used to create. She also mentioned the symbol of non-violence, a pistol with a barrel tied in a knot that is to be made in various sizes from humanium metal. She welcomed His Holiness and all the guests.

In his final remarks His Holiness thanked his hosts for lunch. “Food generates physical energy,” he pointed out, “but physical energy without the guidance of inner peace can be dangerous. Since external disarmament needs to be accompanied by inner disarmament I really appreciate the efforts this organization, IM, is taking to bring about peace in the world.”