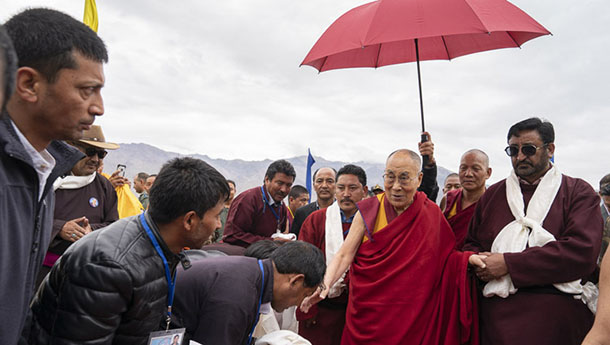 His Holiness the Dalai Lama being escorted to his motorcade on arrival at the helipad in Padum, Zanskar, J&K, India on July 21, 2018. Photo by Tenzin Choejor

Zanskar, J&K, India — His Holiness the Dalai lama reached Padum, Zanskar from Leh on July 21, 2018. He was received by representative from local communities at the Military helipad.

Well wisher stood for hours, in their traditional costume to get blessing and welcome him to the Zanskar valley.

Tibetan spiritual leader asked local representative about the progress of Men-Tsee-Khang, Tibetan clinic and their work.

“It’s very good to have arrived in Zanskar once more,” he told the small gathering, “and the light rain that has fallen after we landed seems auspicious.”

According to his official webpage, Nobel Peace Laureate will teach Je Tsongkhapa’s ‘Concise Stages of the Path’ over the first two days, as well as granting an empowerment of the Great Compassionate One. Long life offering to His Holiness will also be made by the local communities, according to the report. He is also scheduled to visit local educational and health facilites.

Zanskar is a sub-district or tehsil of the Kargil District. which lies in the eastern half of the Indian state of Jammu and Kashmir. The administrative centre is Padum. Zanskar, together with the neighbouring region of Ladakh, was briefly a part of the kingdom of Guge in Western Tibet.

His Holiness is currently on a month long teaching tour in the Ladakh region.