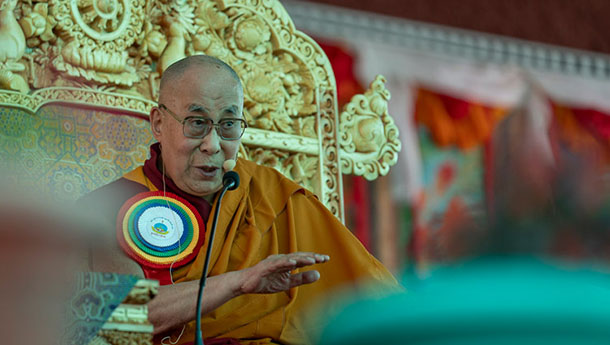 His Holiness addressing the crowd of over 8000 during the Inauguration of the Great Summer Debate in Sumur, Ladakh, J&K, India on July 15, 2018. Photo by Tenzin Choejor

Sumur, India — The spiritual leader of Tibet, His Holiness the Dalai Lama inaugurated the Great Summer Debate at Samstanling Monastery in Sumur, Ladhak (Nubra valley) amidst warm reception on July 15,2018.

Among many dignitaries and people holding important public offices, former Gaden Tripa Rizong Rinpoche was both the host and guest at The Great Summer Debate.

His Holiness spoke about the need to study ancient Buddhist psychology, he said “Whether we follow a spiritual path or not, we need to improve our education. And in this, logic and psychology can be very useful. The psychology of ancient India can effect an inner transformation by enabling us to see how negative emotions lead to negative consequences. It can help us overcome and eliminate them by revealing the workings of our minds and emotions. Just as we can learn how helpful love and compassion can be, we can come to understand that anger, pride, jealousy and arrogance can be detrimental”.

He also spoke about importance of having different tradition in this world. “.... wherever I go, I never suggest that Buddhism is best or try to propagate it. To do so would be like claiming that one medicine is better than others whatever the circumstances or condition of the patient. Indeed, even the Buddha taught different things at different times to different people, because he taught according to their capacity and disposition”.

In his concluding remarks, he said “Training in reason and logic has enabled us to engage usefully in mutually beneficial discussions with modern scientists. We have learned more about the external world and they have learned about the mind. Despite this kind of progress, many of us still follow Buddhism in a simplistic fashion. We need to understand better what the Buddha taught about—this is what I will explain over the coming days”.

This is the sixth edition of Yarchoe Chenmo, The Great Summer Debate, which is held annually in the region.