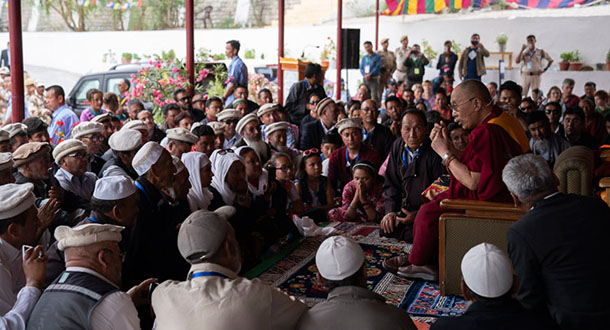 His Holiness the Dalai Lama speaking to members of the Muslim communities of Turtuk, Bogdang and Nubra in Diskit, Nubra Valley, J&K, India on July 13, 2018. Photo by Tenzin Choejor

Diskit, Ladakh, J&K, India — His Holiness the Dalai Lama met with members of the Muslim communities of Turtuk, Bogdang and Nubra in Diskit, Nubra Valley, J&K, India on July 13, 2018, recalling the excellent relations that had persisted between Tibetans and the Muslims who had settled in Lhasa during the time of the Fifth Dalai Lama.

He repeated his appreciation that members of that community, now resettled in Srinagar, keep up their exquisite command of Central Tibetan dialect, which they continue to pass on to their children.

His Holiness mentioned that recently in Leh representatives of the Sunni and Shia branches of Islam had come to see him. He had suggested to them that since India has a longstanding tradition of inter-religious harmony and since there have been no reports of strife between Sunnis and Shias in this country, Indian Muslims might join together to convene an international conference of Muslim leaders to examine how to mollify such quarrels elsewhere in the world.

On his way back to Diskit Monastery, His Holiness visited the newly established Diskit Jama Masjid where he stood in prayer. Seated outside, various Muslim elders and leaders expressed appreciation of His Holiness’s role in the world.

It was observed that he had been given awards such as the Nobel Peace Prize not for preaching about Buddhism, but for his veneration of all religious traditions and his work to promote harmony among them and peace in the world. People make mistakes, but leaders like His Holiness influence people everywhere for the better.

Representatives of Muslim communities in Turtuk, Bogdang and Nubra also joined His Holiness for lunch in a marquee beside Diskit Phodrang.