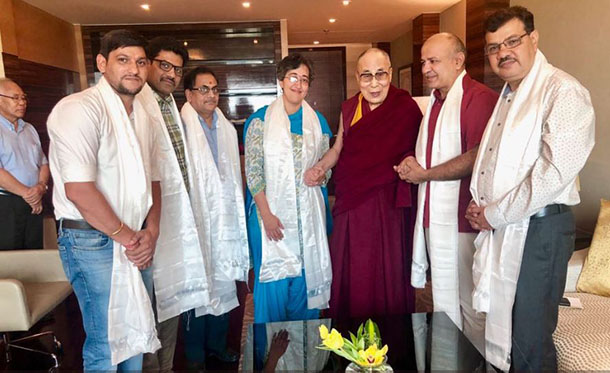 Manish Sisodia. Manish Sisodia accompanied by his team meeting with His Holiness the Dalai Lama in New Delhi, India, on June 30, 2018. Photo: @msisodia

The Nobel Peace laureate made the remarks when Delhi Deputy Chief Minister Manish Sisodia met him on Saturday to apprise him of the “Happiness Curriculum”. The Tibetan spiritual leader also said India is the only country in the world that can bring together modern knowledge, technology and ancient knowledge of understanding the mind.

His Holiness the Dalai Lama will launch the “Happiness Curriculum” for government-run schools in the capital on July 2. The curriculum, for students from nursery to Class 8, will promote activity-based learning and will seek to develop children into happier, and more confident individuals.

Sisodia, who also handles the education portfolio, said in a series of tweets that he thanked His Holiness the Dalai Lama for accepting the invitation and shared with him the work done by his department. “Had the honour of meeting Dalai Lama today. Went to thank him for accepting our invitation to launch the ‘Happiness Curriculum’ in Delhi government schools.”

“Shared with him all the work we have done in developing the ‘Happiness Curriculum’ and how we feel this can have a transformative impact on our society, Sisodia said, adding: “Dalai Lama shared that he felt that teacher training was at the heart of our Education system and was happy to know of our initiative.”

“He rightly said that India is the only country in the world that can bring together modern knowledge, technology and ancient knowledge of understanding the mind,” the Minister said. He hoped the Delhi government can play a small part in bringing to life vision of Dalai Lama through the “Happiness Curriculum”.

The Governor of Sikkim, Srinivas Patil along with the first lady Rajani Devi also met the spiritual leader of Tibet, His Holiness the Dalai Lama in New Delhi Friday, June 29, 2018. The couple received blessings from the holiness and exchanged greetings. Meanwhile, they also offered a traditional Buddhist scarf called “Khadas” to the Nobel Peace laureate wishing him good health.