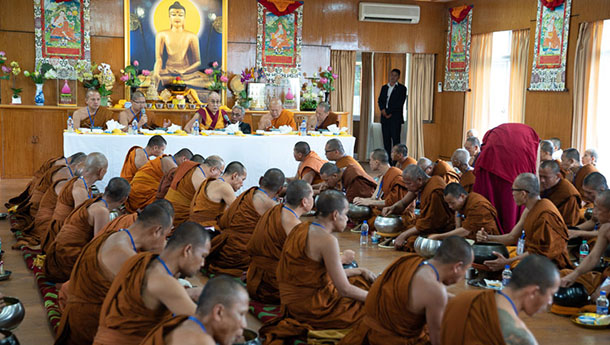 His Holiness the Dalai Lama having lunch with Thai monks and their supporters at his residence in Dharamsala, HP, India on June 9, 2018. Photo by Tenzin Choejor

Dharamshala, India — A group of Buddhist monks from Thailand assembled before His Holiness the Dalai Lama at his official residence on Saturday to receive his blessing, before heading out on a march for world peace, from Dharamshala to Leh City in northern India’s Jammu and Kashmir state.

After talking to over 1200 people from India and abroad, include 200 Tibetans, at the Main Tibetan Temple on June 9, 2018, the Nobel Peace Laureate had lunch with Thai monks and their supporters at his residence in Dharamshala, India.

Organized by the Thai-Dharamshala Charity Society, the march is aimed at promoting love, kindness, and compassion in the world. This time, over 150 people including 88 Thai monks, 13 nuns, 48 lay-people and 8 foreign supporters are participating the peace march.

To begin with a Thai Elder expressed the group’s gratitude for His Holiness’s kindness and hospitality. He replied that it was a great honour for him to share lunch with all of them.

“Fifty years ago, before Thailand entered into diplomatic relations with China, I visited your country two or three times and had an audience with His Majesty the late King. I also joined local monks on their alms round and I remember that the Bangkok streets were hot, so although I was pleased and happy to be there, my bare feet suffered.

“I greatly admired the Thai Buddhist way of life as I saw it. Today, you are about to set out again on your Dhamma Pad Yatra, your third Walk for World Peace from here to Leh and I’m happy to have been able to welcome you and offer you lunch.

“I’m very reluctant to say that one religion is better than another, just as we could not claim that one medicine is the best remedy for everything. However, I do believe that by observing the three trainings of ethics, concentration and wisdom we can tackle our emotions and transform our minds enabling us to be of greater help to other people," he said.

"In that respect Buddhism has something universal to contribute to our common well-being. We can share this with others in a secular way without talking about liberation or nirvana, concerning ourselves only with becoming happier human beings in more peaceful communities,” he added.

Prayers to offer the food were recited in Pali and Tibetan. At the end of the meal His Holiness wished all his guests well as they set out on their pilgrimage.