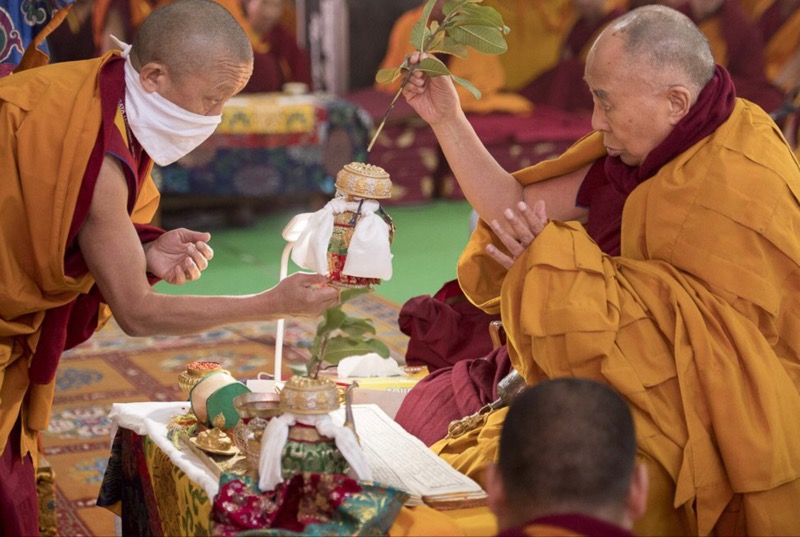 His Holiness the Dalai Lama conducting preliminary procedures for an empowerment in Bodhgaya, Bihar State of India on January 23, 2018. Photo: Lobsang Tsering

Bodhgaya, Bihar, India — China has a special connection with Manjushri, and Wu Tai Shan—the Five Peaked Mountain is the sacred place associated with him,” His Holiness the Dalai Lama Tuesday told thousands of devotees in Bodhgaya, specially Buddhists from China, adding: “Meanwhile, I pray that one day I may visit Wu Tai Shan to receive Manjushri’s blessings—and you can pray for that too. To make your having come to Bodhgaya worthwhile, try to develop an understanding of emptiness and cultivate a good heart.”

This morning, His Holiness the Dalai Lama arrived at the Kalachakra ground in Bodhgaya greeted the crowd, on January 23, 2018. While the ‘Heart Sutra’ was chanted in Chinese, he undertook preparations for a Sarasvati permission he had decided to give. He remarked that during the current series of teachings he has been giving here in Bodhgaya, people from several traditionally Buddhist countries had recited the ‘Heart Sutra’ at the beginning of teaching sessions in their respective styles and languages. He recalled that fifty years ago young Westerners began to travel to Asia in general and India in particular, where they took an interest in ancient Indian knowledge. Many of them became Buddhists. Consequently, today, the ‘Heart Sutra’ would also be recited in English.

“Since religious traditions have, by and large, been of benefit to human beings, they are worthy of our respect,” His Holiness explained. “It’s very sad if religion becomes the basis of conflict and violence. Therefore, it’s good to work for harmony among our various traditions. In Tibet I knew very little about other traditions, but in India I met people like Thomas Merton, a deeply spiritual man, who opened my eyes to the potential of Christianity. Subsequently, I made friends with people belonging to other faiths and developed admiration for them. In Scotland, on the other hand, a dedicated monk told me that he would remain a Christian while his teacher still lived, but after that he wanted to practise as a Buddhist.

“This reminds me of another story of a Tibetan woman in the 1960s who accepted support from missionaries to ensure her children went to school. She told me that to repay their kindness she would be a Christian in this life, but a Buddhist again in the next. Whether to adopt a religious practice is our own choice. It’s not something that can be imposed by force.

“The way people approach religious practice can vary widely. Generally people whose faculties are not so sharp are content to rely on faith, but people who have a sharp intelligence like to examine what they’ve learned in the light of logic and reason. Consequently, these days, I’m impressed by the approach taken in the ‘Ornament for Clear Realization’ to introduce Buddhism first by discussing the Two Truths, then the Four Noble Truths and finally through understanding the qualities of the Three Jewels—the Buddha, Dharma and Sangha.”

Before resuming his reading of the ????iamond Cutter Sutra’, His Holiness announced that he would be giving a permission of Sarasvati, the female deity associated with wisdom, at the end.

He read steadily through the text stopping here and there to comment. He remarked that the way to develop an understanding of emptiness is to listen to explanations of it, reflect on what you’ve heard and meditate on what you’ve understood. The sutra repeatedly makes the point that although phenomena are empty of inherent existence that isn’t to say that they don’t exist at all because they have a functional existence by way of designation. This is the Middle Way the point of view that avoids the two extremes of permanent existence and not existing at all.

His Holiness suggested that the Buddha’s statement in the penultimate verse is capable of vast interpretation. Once again it alludes to the ultimate reality of things in the context of their nominal existence, their existing by way of designation—space-like emptiness and the illusory nature of things.

In what spirit is this explanation given? Without being caught up in signs, just according to things as they are, without agitation. Why is this?

All composed things are like a dream, a phantom, a drop of dew, a flash of lightning. That is how to meditate on them, that is how to observe them.

His Holiness recommended that the Chinese devotees introduce the recitation and study of Nagarjuna’s ????undamental Wisdom of the Middle Way’ and ‘Ornament for Clear Realization’ in their monasteries and temples. But, he added, this should not be restricted to monastics, lay-people should participate too.

As he began the Sarasvati permission, His Holiness clarified that it came from a collection called Rinjung Gyatsa that he had received from Tagdrak Rinpoche. He mentioned that Sarasvati is the female deity most closely associated with wisdom, much as is Manjushri, adding:

????hina has a special connection with Manjushri, and Wu Tai Shan—the Five Peaked Mountain is the sacred place associated with him. If you Chinese can do the practices of these two, Manjushri and Sarasvati, it will be of special benefit to you. Meanwhile, I pray that one day I may visit Wu Tai Shan to receive Manjushri’s blessings—and you can pray for that too. To make your having come to Bodhgaya worthwhile, try to develop an understanding of emptiness and cultivate a good heart.”

The session ended with a representative of the Organizing Committee reviewing the various teachings that have taken place since His Holiness arrived in Bodhgaya at the beginning of the month. He gave a statement of accounts to make clear what had been received in terms of donations and sponsorship and what had been spent by way of expenses. He concluded by thanking the Gaya Administration, the Bodhgaya Temple Management Committee and many others for their dedicated help in not only making the events possible, but ensuring they ran smoothly and safely.