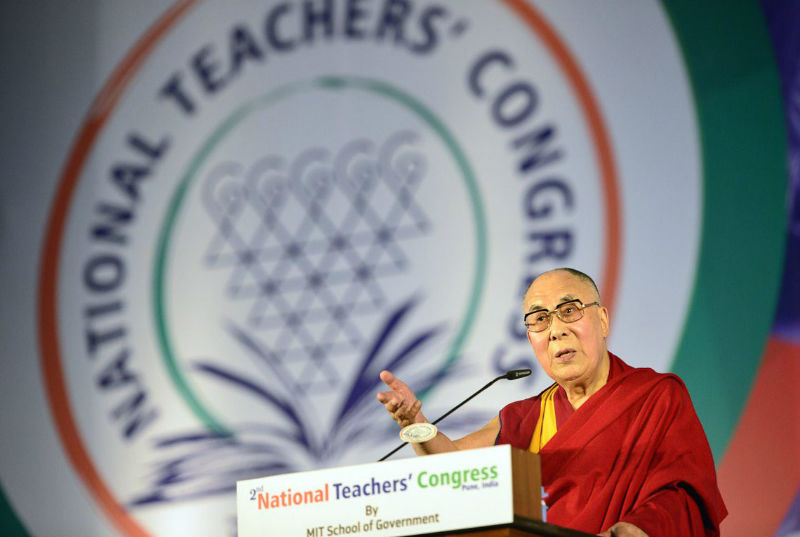 Pune, Maharashtra, India — '21st century should imbibe peace, dialogue, disarmament and oneness of humanity. In order to create peaceful century, first we need to promote compassionate mind through education,' His Holiness the Dalai Lama told 5000 plus teachers of post graduate and undergraduate colleges of all disciplines from India and 1000 teachers of Indian origin serving globally, attending the 2nd National Teachers' Congress held in Pune of Maharashtra State, India, on January 10, 2018.

Addressing the 2nd National Teachers' Congress, chief guest of the event, the Buddhist leader hailed India's unique potential to combine modern technology and science with its ancient knowledge on the workings of mind and emotions.

Emphasising the need for compassion in today's increasingly troubled world, the spiritual leader of Tibet said "Many of the man-made problems we face, are due to an emotional crisis that we see taking place across the world. He pointed out that medical scientists have observed that anger is clearly detrimental for our health and well-being."

"Constant anger actually eats into our immune system. Compassion acts as a positive counter force to that. Common sense tells us that compassion is important. Even animals show each other affection and compassion and they are capable of responding if we show them an angry face.

We regard neighbours who are honest, compassionate and sincere with affection and respect, even if they are not well off. We feel it's a pleasure to meet them. On the other hand, if our neighbours are powerful and wealthy, but never greet us with a smile, we'd prefer not to see them. That's human nature."

"Modern education pays little attention to inner values and yet our basic human nature is compassionate. We need to incorporate compassion and warm-heartedness into the modern education system to make it more holistic. Much of the turmoil we witness across the world is because people are overwhelmed by disturbing emotions that they have no idea how to tackle," His Holiness the Dalai Lama told the crowd.

"I believe that the rich understanding of the workings of the mind and emotions that we find in ancient Indian traditions remains relevant today. There would be great value in examining this and applying it, not from a religious point of view, but from an academic and practical standpoint."

As the inaugural ceremony came to an end, His Holiness was invited to present the Jeevan Gaurav Puraskar Awards to four people who have made an outstanding contribution to education.

The 82-year-old Nobel laureate reiterated his lifelong campaign for peaceful, dimilitarised world. "The next century should be a century of dialogue and discussion rather than one of war and bloodshed. We must embrace oneness of humanity, not nationalistic views. We must strive towards making the later part of this century a dimilitarised world. Use of force is outdated. Then in tackling our differences with others, we should embrace compassionate approach, with the conviction in the onesness of humanity and learn to live on this planet together as human brothers and sisters".

Ravi V Karad, Vice President, MAEER's MIT group and founder, MIT school of government, National Women's Parliament called His Holiness guru of the gurus. "Today your presence, I have no words to express my happiness. You blessed this campus first time in 1996 when you came for world peace conference, second time in 2013 for Indian Students Parliament, then in 2017 for Naational Women's Parliament. I am grateful from bottom of my heart. I look at him, as he is a guru of various gurus." He also thanked President Dr Lobsang Sangay of Central Tibetan Administration.

His Holiness also met with more than 130 members of the Tibetan community in Pune—students, shopkeepers and some professionals. In his talk to them he touched on the need to study Tibetan. He explained that Tibetan is the language in which Buddhism, particularly of the Nalanda Tradition, can be explained most accurately. He brought them up to date on the political situation with regard to Tibet stressing that things are changing in China. He assured them that he remains hopeful things will change for the better.

His Holiness then drove straight to Pune Airport from where he flew directly to Gaya, arriving back in Bodhgaya at the end of the afternoon.